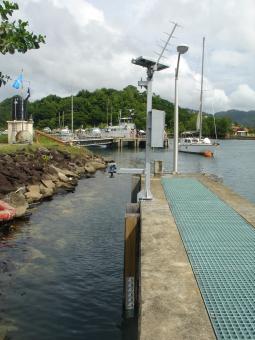 The National Oceanography Centre (NOC) contributed to the sea-level section of the latest report covering the climate of the UK.

Sea-levels at the coast are measured by tide gauges. These instruments are situated in locations, such as harbours, and measure the water level at a single point relative to the land they are attached to. They measure the rise and fall of the tide, typically at intervals of a few minutes, as well as other changes in sea-level, including:

Sea-level is also measured by satellites by bouncing radar signals off the sea surface. Instruments called altimeters can measure sea-level averaged over a wider area of the sea-surface by measuring the time taken for satellite signals to return. This measurement is relative to a fixed reference point, such as the centre of the Earth, from which the satellite’s orbit is known.

High-accuracy, coastal sea-level monitoring by tide gauges is important for three reasons. The first being to keep track of sea-level trends and detect any accelerations in the rate of sea-level rise around the UK (detecting whether the rate of sea level rise is getting faster). Secondly, this monitoring means the UK is able to contribute climate-quality records as part of world-wide efforts to monitor long-term coastal sea-level change and variability. And the final reason is to provide measurements independent of those obtained from satellite altimeters. This is important because records from these are not yet sufficiently accurate near coasts and only make repeat measurements at the same place at intervals of many days, which is insufficient to capture the statistics of extreme events (like storm surges).

The UK’s tide gauge network of over 40 gauges provides information to the Environment Agency for flood warning but a smaller number of gauges are intended to be accurate enough to provide information about long-term trends in the mean sea-level (after shorter period tides and storm surges are removed) as UK’s contribution to the Global Sea Level Observing System (GLOSS).

Commenting on the sea-level section of the report, the NOC’s Director, Professor Edward Hill, said “Sea-level around the UK is expected to continue to rise due to an increased rate of ice loss from the Greenland and Antarctic ice-sheets, as well as continued glacier mass loss and warming of the ocean. An immediate consequence will be higher extreme sea-levels, which cause flooding and threaten lives, property and key infrastructure.”

“However, the report highlights continuing concerns around the quality of UK sea-level measurements. As the report states, we have been unable to calculate the uncertainty of the UK sea-level index for 2018 and 2019, as only one of the long-term tide gauge sites is producing data of sufficient quality”.