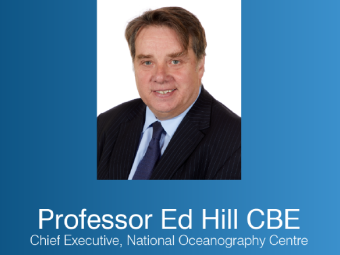 The National Oceanography Centre’s Chief Executive, Prof Ed Hill, has been awarded a CBE in the Queen’s Birthday Honours 2020 list, published today, in recognition of his services to ocean and environmental sciences.

Ed is a world-leading authority on ocean science and is dedicated to raising awareness of ocean issues and advancing the science and technology to understand our seas. Having been part of the Natural Environment Research Council (NERC) for over 20 years, he has recently led the National Oceanography Centre (NOC) into an independent charity, using its freedom and scientific expertise to drive forward greater innovation and influence.

Commenting, Ed Hill, said, “I am delighted and honoured to receive this award, which I feel is also recognition of the tremendous journey the National Oceanography Centre has been taking as a force for good all over the world. I am grateful for the help and support of my family, friends and colleagues throughout my career and remain dedicated to raising the profile of the vital role the ocean plays in our world.

The importance of the ocean and the science needed to understand it has moved centre stage, as awareness has grown of its crucial role for human wellbeing and prosperity, and that this depends on the heath of marine ecosystems under increasing threat. I believe that, enabled by new technologies, oceanography in the 21st century is undergoing a radical transformation into truly big science and now needs the global infrastructure of a full ocean observing system to continually monitor and make sense of the world’s rapidly changing seas.”

Born in the city of Coventry, about as far from the sea possible in Britain, Ed was brought up in South Australia right by the coast and returned to the UK at nearly 8 years old on a four-week passage by ship to Southampton, where he believes the seeds were sown for his passion for the ocean. Ed spent many years as a leading researcher and chief scientist undertaking over 20 expeditions at sea studying water circulation on continental shelves. He has served on numerous national and international advisory bodies and is a key source of expertise to the UK government. He was appointed OBE in 2010 for services to environmental sciences.

NOC Board of Trustees Chairman, John Hirst CBE, commented “It is great to see Ed’s contribution recognised in this way, and we feel very lucky to have him leading NOC. His passion and dedication are unquestionable, and he has been a key figurehead in the recent advances at NOC.”