The NOC at the Bluedot music and science festival 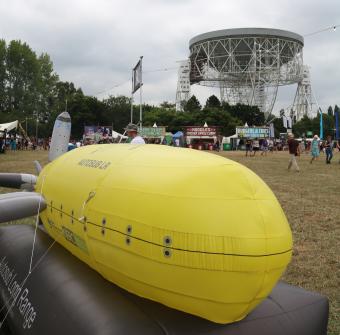 The NOC recently continued its public outreach and science communication activities at the BlueDot festival in Cheshire from the 19th to 22nd of July, via an interactive exhibit featuring projects using the MARS fleet of marine robots. The festival delivers a unique blend of science and arts set within the jaw-dropping landscape of the Jodrell Bank Observatory and its radio telescopes.

The festival opened to the sounds of the Hallé Orchestra in partnership with the Blue Planet II team to provide the perfect introduction to our planet’s oceans that the NOC team were able to expand upon over the rest of the weekend. The event was coordinated by Dr Charlotte Williams and Craig Corbett with assistance from the NOC Comms team. Senior NOC scientists, Dr Matthew Palmer and Dr Steph Henson, led teams from across Liverpool and Southampton presenting work being undertaken under the AlterEco, SOLSTICE-WIO, GOCART and COMICS projects, each of which are using the latest autonomous technologies to undertake marine science across the globe.

Visitors to the NOC stand proved to be very hands-on and keen to engage with the NOC team while taking time to participate in demonstrations, such as constructing zooplankton poo and helping design optimal glider buoyancy. The hands-on exhibits provided an excellent introduction to NOC research into complex subjects, such as marine carbon cycles and shelf sea ecosystem functioning. The NOC team met with over 1000 visitors each day and found that the science focus of the festival brought along an enthusiastic and science-literate audience, which led to some lengthy discussions about ocean science and technology in general, as well as the NOC’s work overseas and future funding scenarios. The marine plastics and climate change focus of the Blue Planet II series was also clearly high on everyone’s agenda, and this enabled communication of the work that NOC and UK researchers are doing in this field, as well as providing an excellent platform for the team to introduce the importance of their own field of interest.

Thanks to all the team members that worked hard to make this event such a success and for enduring the camping and festival showers.