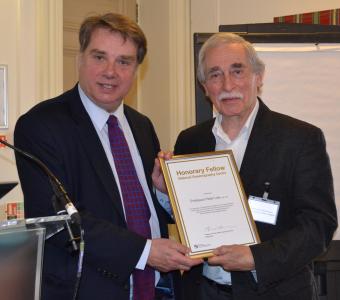 Professor Liss is a distinguished environmental chemist who has undertaken pioneering, internationally recognised research in the field of global biogeochemical cycles. He has greatly contributed to knowledge of the cycles of silicon, the halogens, sulphur and selenium. With over 240 peer reviewed research publications, his particular specialism concerns biogeochemical interactions between the ocean and the atmosphere, especially the processes of air-sea gas exchange, the mechanisms of trace gas formation in the oceans, their reactivity and role in the atmosphere.

Peter’s exceptional standing in the field of ocean-atmosphere science owes much to his vision and tireless work to bring researchers together to address big questions that span beyond the boundaries of his own immediate research interests. In so doing, he has provided leadership and inspiration for large communities of scientists (for example, as Chair of the Scientific Committee of the International Geosphere Biosphere Programme (IGBP) from 1993–97 and as Chair of Scientific Steering Committee of the International Surface Ocean Lower Atmosphere Programme (SOLAS) from 2001–07).

Making the award at the annual meeting of the NOC Association in London on 9 May 2019, the Executive Director of the NOC, Professor Edward Hill said, “I am delighted that the NOC is able to recognise the achievements of Peter Liss with the award of a NOC Honorary Fellowship. Peter is not only a very distinguished scientist he has also served the marine science community in a selfless way dedicating considerable time and energy to advocacy and support for ocean sciences working through numerous Government Committees, and institutional advisory and governing bodies. He has always recognised that progress in science depends on activities often led and delivered by unsung heroes and his willing support and leadership in these areas has been crucial”.

Peter said, “I am delighted to receive the Honorary Fellowship from NOC. It is great honour since NOC is world leading in its oceanographic research, showing how the we can excel in innovative science and advanced technology for observing the oceans. NOC also plays a leadership role in providing facilities for UK marine scientists, as well as representing us both at home and internationally, a role I hope I have been able to help with as Chair of the NOC Association which represents the whole UK marine science research community. I look forward to the NOC continuing these traditions as it moves to the next stage of its development as an independent research institution funded by, but no longer owned by the Natural Environment Research Council and I wish it much success in the future.”