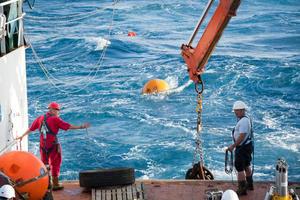 The study, led by the University of Arizona, highlights the role of ocean circulation changes in an extreme sea level jump along the Northeast Coast of the US. Using measurements of ocean circulation made as part of the RAPID climate change programme, the researchers showed that the sea level jump of 128mm was related to an unprecedented drop in the strength of Atlantic currents in 2009–10.

Dr Gerard McCarthy senior researcher with the RAPID project said, ‘This abrupt rise in sea level occurred two months after the drop in circulation was seen at the RAPID array. For major cities along this coastline, a rise of just 13cm significantly increases their vulnerability to flooding.

‘NOC is developing technology that will enable data from the RAPID array to be delivered from the ocean moorings in real time. We hope to deploy the new technology later this year. Eventually this could feed into a early warning system for future events like these.’

Since 2004 the Atlantic’s overturning circulation has been monitored using the RAPID array – sensors that measure changes to the current’s strength, temperature and salinity. Ocean currents are measured in Sverdrups (one million tonnes of water per second). Based on this research, for every Sverdrup decrease in circulation, a sea-level rise of 13mm occurs along this eastern seaboard coastline.

Over the first ten years of the RAPID programme scientists at NOC detected a decrease of half a Sverdrup per year, implying a sea level rise of 6mm per year – three times the rate of global sea level rise.

RAPID data measurements are freely available to all scientists and have been used in many peer-reviewed studies.