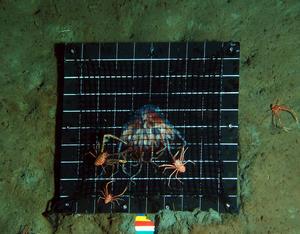 Innovative experiments carried out by scientists at the National Oceanography Centre (NOC) and abroad show that dead jellyfish contribute to the deep-sea food chain, unlike previously thought.

Researchers from the UK, Norway and Hawaii deployed lander systems to look at how scavengers responded to jellyfish and fish baits in the deep sea off Norway. The experiments were carried out in areas with jellyfish blooms near the ocean surface and showed that when the creatures fell to the seabed they were rapidly eaten by scavengers.

Daniel Jones from the National Oceanography Centre, who is one of the authors of the study, explained: “In recent years, anecdotal studies have suggested that when jellyfish blooms die off, massive quantities of the creatures can sink to the ocean floor to form ‘jelly-lakes’, which are not eaten then simply rot, depleting the oxygen on the ocean floor and repelling fish and other sea creatures. However, as our video footage on YouTube indicates, it seems that ‘jelly-lakes’ may be the exception rather than the rule and that jellyfish carcasses are consumed at speed by a host of deep-sea scavengers such as hagfish and crabs.” 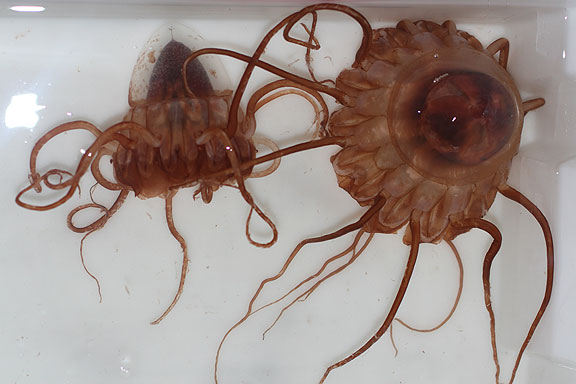 Globally there are huge numbers of jellyfish in the ocean, and in some parts, jellyfish blooms are increasing, seemingly as a result of nutrient enrichment and a warming climate. This research has also prompted a fresh look at the role of jellyfish in the carbon cycle. It had been thought that when the jellyfish sank to the seafloor they were essentially taken out of the system. However, the new research shows that this is actually not the case and that the carbon is retained in deep-sea food webs. This is considered to be especially important when other food sources in the deep-sea ecosystems may be decreasing as the ocean warms.

The new study was led by Andrew K. Sweetman at the International Research Institute of Stavangar in Norway, in conjunction with NOC and Craig R. Smith at the University of Hawaii in Manoa. The findings have just been published in the prestigious journal Proceedings of the Royal Society: Biological Sciences 20142210.

Additional time-lapse video footage of sea creatures scavenging jellyfish baits on the ocean floor can be seen below and on our YouTube channel.