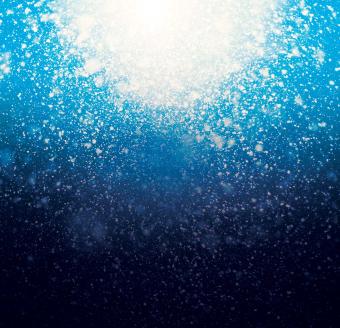 A study by scientists at the National Oceanography Centre (NOC) has shown that carbon storage in the deep ocean may be considerably less permanent than previously assumed, raising questions about the role the ocean may play as a carbon sink in the future.

Marine life keeps atmospheric carbon dioxide levels 50% lower than they would otherwise be, by transferring and trapping carbon deep in the ocean. However, this paper entitled, ‘Biological carbon pump sequestration efficiency in the North Atlantic: a leaky or a long-term sink?’, published in Global Biogeochemical Cycles, found that only 66% of the carbon reaching 1000m depth in the North Atlantic will stay away from the atmosphere for 100 years, a timescale often used as a criterion for carbon storage.

The storage of biological carbon, originating from drifting microscopic plants, is typically assumed to be highly efficient once it reaches 1000m. This carbon is assumed to enter deep circulation pathways that keep it away from the surface for centuries or even millennia. As a part of the nationwide CLASS project, NOC scientists used a global ocean circulation model to simulate the pathways of carbon reaching different depths in the deep ocean to assess how much made its way back to the surface ocean within 100 years.

Dr Chelsey Baker, lead author and Ocean Biogeochemical Model Analyst at the National Oceanography Centre, said: “The ocean is an important carbon sink, and the depth to which biological carbon sinks affects how much atmospheric carbon dioxide the ocean stores. In this study, we show that the longevity of carbon storage in the deep ocean may be considerably less than what’s generally assumed.”

There is considerable scientific interest in how rapidly the ocean is taking up the carbon dioxide (CO2) human societies are producing, how long this CO2 might remain there, and even whether we can harness the ocean to store CO2 more efficiently. Consequently, the NOC’s findings are of direct relevance to climate change mitigation approaches that aim to use the ocean for long-term carbon storage, such as carbon drawn down by marine carbon dioxide removal schemes.

Dr Chelsey Baker continued, “Our findings could be important because artificially enhanced carbon storage by the ocean is one avenue being explored to help us achieve net zero by 2050. For example, by ocean schemes for carbon dioxide removal, such as iron fertilisation. The effectiveness of such nature-based solutions is often dependent on the assumption that carbon reaching the deep ocean will be stored for hundreds of years, something our work suggests may not be so simple.”

This work was undertaken as part of the CLASS project which aims to deliver knowledge of the Atlantic Ocean system that society needs to make evidence-based decisions regarding ocean management. This includes understanding and quantifying key climate regulation and ocean services and predicting how the ocean may evolve as a result of climate change.