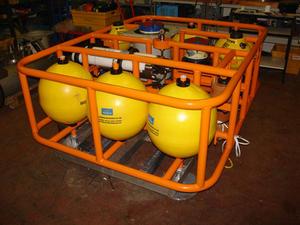 A new experiment is under way that will help forecast the shape of the Dutch coastline under changing climate conditions, involving scientists and engineers from the National Oceanography Centre (NOC).

The “STRAINS” (STRAtification Impacts on Nearshore Sediment) experiment is an international study, designed to understand how the presence of the River Rhine plume – a buoyant mass of freshwater formed as the river meets the denser seawater at its mouth – affects sediment transport along the Dutch coastline. NOC will provide the scientific underwater platforms that will measure turbulence and sediment transport in the nearshore area off the coast of the Netherlands. NOC staff will also help in the design and planning of the overall experiment.

This information will contribute to coastal management strategies dealing with future coastal hazards and their impact on the natural and built environment in coastal zones – predicted to be exacerbated in the coming decades as a result of climate change.

Large rivers such as the Rhine are important transporters of sediment from terrestrial sources to the oceans. The Rhine flows through Germany, Austria, Switzerland, France and the Netherlands, before it meets the North Sea at the Hook of Holland where the Rhine plume forms. The plume is laden with the river’s sediment load, and how this load is dispersed by the plume can have a significant impact on the shape of the coastline.

“The measurements will be essential for understanding the sediment transport processes in the water column and near the bed,” said Dr Alex Souza of the National Oceanography Centre in Liverpool, who helped conceive the project last year with collaborators Professor Julie Pietrzak (Delft University of Technology) and Professor Alex Horner-Devine (University of Washington).

“The measurement rigs will be used to investigate processes that impact morphological evolution of the nearshore area. The rigs use state-of-art equipment that can measure the current velocities, turbulence, suspended sediment and water stratification over the full water column and near bed dynamics.”