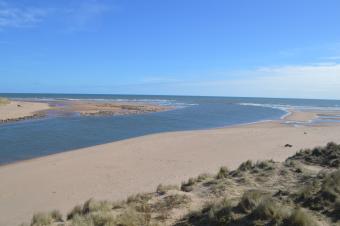 The ongoing water shortage in many countries due to record drought is a wake-up call for humans to take urgent actions to protect freshwater resources.

Scientists from the National Oceanography Centre (NOC) have made a substantial new discovery that brings a better understanding of saltwater intrusion through estuaries and could aid in the protection of vital freshwater resources against increasing salt intrusion risks due to accelerating climate change and human interventions.

Estuarine salt intrusion can have dramatic effects on domestic, agricultural, and industrial water uses. Catastrophic salt intrusion in the Yangtze estuary in China threatened the drinking water for more than 25 million people. The Mekong Delta, a hugely important region for food production such as rice and shrimp recorded its worst ever salt intrusion in the 2019/2020 dry season, leading to a six-month shortage in freshwater threatening the entire global food security. The impact of salt intrusion on estuary ecosystems cannot be underestimated either, because estuaries provide vital habitats to a large variety of plants and animals that can only survive within a certain salinity limit.

From the Marine Physics and Ocean Climate group at the National Oceanography Centre, lead author, Dr Xiaoyan Wei, said: “Estuarine salt intrusion is a real problem across the world. As saltwater is set to intrude further into estuaries with rising sea levels and more extreme weather events, precious freshwater from the upper part of these estuaries will be lost, causing further water restrictions, crop abandonment, and biodiversity loss. The ongoing water shortage in many countries due to record drought is a wake-up call for humans to take urgent actions to protect freshwater resources.”

One method of salt intrusion mitigation is the construction of physical barriers, such as weirs. Weirs are staple feature of British rivers, forming a small barrier across the width of a river to control the flow of water. Another is sluice gates, a moveable structure allowing water to pass underneath it. Whilst these can help to prevent the influx of salty water into the freshwater streams, they come at a huge cost and can have impacts of their own such as reduced estuary length and adverse effects on fish migration.

Their study highlights the importance of considering the impact of estuary length to effectively mitigate salt intrusion into estuaries, which is necessitated to meet growing human demands for freshwater and maintain the healthy sustainable functioning of estuarine ecosystems.

Commenting on the study’s findings, Dr Xiaoyan Wei said: “This research shows how the effectiveness of barriers for protecting freshwater sources depends on the physical location of the barrier along the estuary. It also shows why estuaries of different lengths might experience contrasting trends of salt intrusion under the same natural and anthropogenic changes.”

Whilst not currently as big as an issue in the UK as drinking water and irrigation is not consumed directly from rivers, the threat from rising sea levels and extreme droughts mean the research could be crucial to protecting the UK’s freshwater supplies going forward as mitigation may be needed in the face of climate change.

The paper, Salt Intrusion as a Function of Estuary Length in Periodically Weakly Stratified Estuaries is published in Geophysical Research Letters.