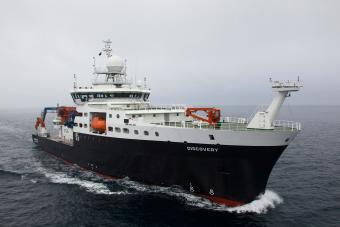 A new sea going bursary has been set up to enable students and early career scientists, including from developing countries who are keen to become involved in the field of marine science or oceanography, to gain practical experience of ship borne science.

The new bursary has been made available by West of England P&I Club, a leading insurance provider to the global maritime industry, through the establishment of a long-term charity programme to mark its 150th anniversary year. The Club has made initial commitments to the NOC, as well as Sailors’ Society and the Blue Marine Foundation, and will be continuing to support Symplefsi and Feeding Hong Kong.

Tom Bowsher, Group CEO, West of England Insurance Services, commented, “West is delighted to collaborate with the NOC to establish the Seagoing Science Bursary. We are serious about investing in the education of future ocean scientists and the study of oceanography and marine sciences. Climate change is an issue of global importance and West is committed to helping ensure that the marine industry has a strong interest in advancing the understanding our oceans and the marine environment.”

The bursary will be managed by the NOC over the next ten years and will enable the recipients to join sea going expeditions on the NOC’s two world-class research vessels the RRS James Cook and RRS Discovery, as well as other vessels involved in its research projects.

The NOC’s Chief Executive, Professor Ed Hill, commented, “We are delighted to be working with West of England P&I Club on this initiative. The beneficiaries will never forget their early sea going expeditions, and for many it will be the start of a lifelong career studying the ocean, in some of the most remote areas of the globe. Research at sea and supporting the education and training of scientists, engineers and marine professionals, especially at postgraduate level, is at the core of our mission as a charity, and so we are especially pleased to have found a partner who shares these values.”

Further details of the bursary and how to apply will be announced in due course.