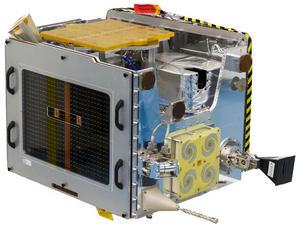 The National Oceanography Centre welcomes the launch by Surrey Satellite Technology Ltd (SSTL) of a new UK-funded satellite – TechDemoSat-1 – that provides a valuable opportunity for in-orbit validation of new instruments to monitor the Earth from space.

Among eight demonstration instruments, TechDemoSat-1 carries a Sea State Payload that aims to measure ocean winds with reflected signals of opportunity from Global Navigation Satellite Systems such as GPS. The technique, known as GNSS-Reflectometry, was first demonstrated in 2004 by SSTL and NOC onboard the UK-Disaster Monitoring Constellation mission.

The Satellite Oceanography team at the National Oceanography Centre is again working closely with SSTL to validate ocean winds from the TechDemoSat-1 Sea State Payload and to determine if the technique could deliver better and more frequent global ocean wind data to operational users, particularly in hurricane conditions.

Dr Christine Gommenginger of the NOC Satellite Oceanography team said “This is another example of NOC supporting the UK space industry/sector in developing technological solutions that address critical environmental needs, such as cost-effective and sustainable monitoring of global ocean winds.”

TechDemoSat-1 was launched into a 635km sun-synchronous orbit onboard a Soyuz-2 launch vehicle with a Fregat upper stage from the Baikonur Cosmodrome in Kazakhstan at 15:58:28 UTC on 8 July 2014.