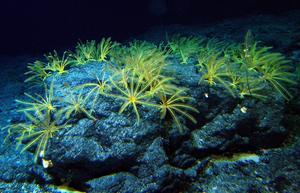 Published this week in PLOS Biology, the study was led by the University of Hawai’i and represents an international collaboration of climate modellers, biogeochemists, oceanographers and social scientists, including researchers from the National Oceanography Centre (NOC).

This is the first time that a study has considered how co-occurring environmental stressors will differentially impact the diverse habitats of the entire world ocean, using climate change projections developed for the Fifth Assessment Report (AR5) of the Intergovernmental Panel on Climate Change (IPCC). The study showed that many areas of the ocean are expected to see the combined effect of ocean warming, acidification, oxygen depletion and reduced primary productivity, which might cascade through marine food chains – in both shallow and deep-sea habitats.

The authors also considered the human ramifications of these changes and concluded that the marine ecosystem services provided by the ocean – such as fishing and tourism – could suffer.

“This study marks a step-change in the way in which people studying the ecology of the open ocean and seafloor are using forward looking models – those used by IPCC AR5,” says Dr Henry Ruhl, co-author and Head of the DeepSeas Group at NOC.

“This effort looked at the complete set of AR5 model outputs and jointly considered potential environmental stressors. This work will no doubt lead to more detailed studies of the potential impact of multiple stressors to various fauna; the challenging task of organising the AR5 model outputs into a set of consensus outputs relevant to marine ecology is now done and should benefit from this effort for several years.”

The full press release from the University of Hawai’i can be viewed at www.soc.hawaii.edu/mora/CMIP5/PressRelease.html.