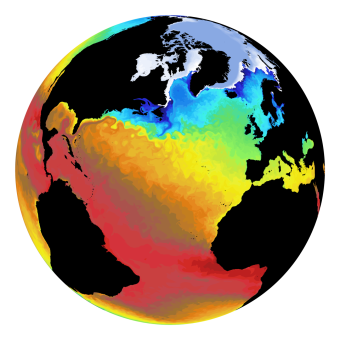 A new whole Earth system computer model developed in the UK has just been launched.

By providing a representation of the planet that draws on all environmental science disciplines, this model will help researchers make better forecasts of environmental change, such as the impact of climate change on marine life.

UKESM1 considers not only the physical components of the climate system, such as winds, ocean currents and ice cover, but also the chemical and biological interactions that affect environmental change. These include representations of chemistry and aerosols in the atmosphere, vegetation on land, and marine biogeochemistry in the ocean.

This new model will play a key role in UK assessments of future change, and reflects the changing role played by the world’s oceans, not least in the uptake and drawdown of atmospheric carbon dioxide.

Dr Andrew Yool, who led the NOC’s contribution to UKESM1, said “It's been brilliant to be involved with UKESM1 and with the many Met Office and NERC ‘midwives’ who've worked so hard to bring it into the world. Now that it is released to the UK community, I hope that it makes lots of new friends out there”.

Researchers wishing to use UKESM1 should go to the NCAS Computational Modelling Services site, where instructions are provided on how to access and configure the model to run on NERC and Met Office computer systems.

For more information on the UKESM project, please visit the UKESM website.