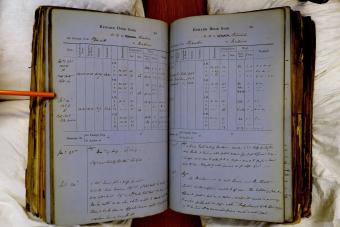 Weather Rescue at Sea, a Zooniverse based citizen science project to digitise weather observations taken across the oceans in the 1860s is now live!

Weather Rescue at Sea, developed by Prof Ed Hawkins and Dr Praveen Teleti at University of Reading, is part of the NOC-led GloSAT project, funded by the Natural Environment Research Council (NERC) to develop and analyse an extended and consistent global surface temperature climate record back to the 1780s, based on air temperature observations recorded across land, ocean and ice. This new GloSAT temperature record will give a longer and more consistent picture of global surface air temperature change, and its analysis will improve our understanding of climate change since the late 18th century.

With the help of volunteers, the Weather at Sea project will rescue millions of pages of weather observations from ships logbooks and fill in gaps in the climate record. Data rescue of historical logbooks, which involves transcribing hand-written observations into computer readable digital format, has been taking place for decades, but, if individual researchers were to transcribe an almost inexhaustible number of logbooks manually, it would take thousands of human lifetimes. Having these data transcribed into digital format with the help of volunteers will make them available on a much larger scale, for scientists to analyse and understand.

If we are to keep global temperature rise below 2°C, it is essential that we understand how the Earth’s climate has changed over time. Although the large-scale picture is clear, some regions and periods have few observations. Filling these gaps helps to give a more detailed picture of how the climate has varied over time in regions where observations are sparse or non-existent.

The ships of the British Navy travelled the world taking weather observations every 3 hours, but climate scientists have never accessed the majority of these logbooks. Weather Rescue at Sea uses the logbooks of ships that voyaged through the Atlantic, Indian and Pacific Ocean basins in the 1860s and are archived at the UK Hydrographic Office in Taunton. The focus is on the 1860s because that is where there are gaps in our digital databases of variations in the weather. Improved data sets will be used to generate new estimates of the industrial and pre-industrial era baseline climate and to improve the models and reanalysis systems used for climate and weather research.

Volunteers can participate in the project through the Zooniverse website, and undertake as much or as little as they like. The task is simple, view images of the hand-written ledgers and add the figures you see into the corresponding columns on the online form.

Find out more about Weather Rescue at Sea