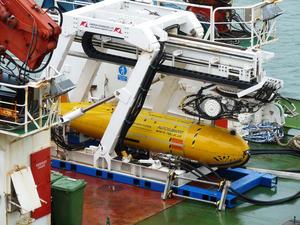 The National Oceanography Centre has welcomed the news that its owning body, the Natural Environment Research Council (NERC) will receive £10 million over the next two years for research and development of Marine Robotics.

The UK has a strong track record in developing autonomous underwater vehicles and, over several decades, NERC – particularly through NOC - has led the world in the use of these technologies in exploring the world’s oceans. This area of technology development poses significant technical challenges, while offering enormous scientific opportunities.

The development of sophisticated marine robotic systems builds on established expertise, enabling more cost effective routine mapping and monitoring of the oceans and seas. This information is needed to support sustainable use of marine resources, monitor the impacts of human activity especially as activity moves into both deeper water and more extreme environments, and to develop reliable seasonal weather forecasts, which are dependent on understanding ocean variability.

The UK’s centre for autonomous underwater vehicles and robotics, MARS (Marine Autonomous and Robotics Systems) is based at the NOC’s waterfront campus and is the main centre for research and innovation in developing these submersibles – which include gliders and the highly successful family of Autosub AUVs – and providing expertise to the UK marine science community.

The creation of MARS fits with NERC’s strategic framework which identifies the need to focus on the development of remote observation platforms, moving systematic measurement of the oceans away from ships and onto a network of autonomous machines, combined with satellite monitoring systems.

The facility, which went live in April 2011, received a major cash injection of £2.85 million from the Department for Business, Innovation and Skills (DBIS) in May to fund two new Autosub Long Range vehicles and enable upgrades to NOC’s fleet of Slocum gliders, some of which are six years old.

Autonomous vehicles also pave the way for the potential development of new UK industries like offshore carbon capture storage, where in situ monitoring of storage sites in the North Sea will need high levels of technical assurance and innovation. Additionally, underwater vehicles provide an opportunity for enhanced monitoring of the environmental status of UK seas. The future development of autonomous vehicles able to support a myriad of potential research, environmental, and industry applications, will require a step change in technology, particularly in battery / power systems, and data transmission to shore. The UK has an excellent opportunity presented to it to be a leader in marine robotics and it is anticipated this initiative will engage with UK academia and industry in the relevant technology development, and demonstration projects. The outcomes will potentially support the defence, space, oil and gas environmental protection and emergency service sectors.