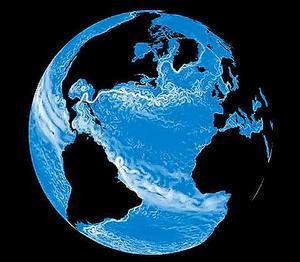 Scientists at NOC and the Met Office are using sophisticated computer models to increase our understanding of ocean circulation and its influence on global climate.

A new film, published on NOC’s YouTube channel, shows a high resolution ocean simulation using the NEMO (Nucleus for European Modelling of the Ocean) model, which is being developed by the NOC-based team.

This film, produced using NEMO output, shows the surface speed of ocean currents with whiter colours indicating faster speeds. The simulation, with a time scale from 1978 to 1986, shows clearly the surface part of the circulation that conveys vast bodies of water around the globe and redistributes heat and salt in the process.

By understanding the complexities of these currents and the ways in which the sea-surface interacts with the atmosphere, scientists can investigate past and potential future changes in the Earth’s climate system.