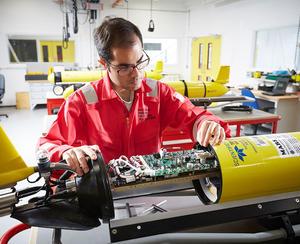 The National Oceanography Centre has won a place at Innovate 2015, which takes place on 9 and 10 November at Old Billingsgate in London. This award acknowledges the NOC’s growing success in the marine technologies sector and the opening of NOC’s new £3 million Marine Robotics Innovation Centre later this month.

During Innovate 2015, the NOC will showcase some of the technology for marine autonomous systems that has been developed by NOC technologists and scientists in collaboration with business partners.

Kevin Forshaw, Associate Director, Innovation and Enterprise at the NOC said: “Innovations in marine robotics are changing the way oceanographers undertake research, and also how marine surveys are conducted by the oil and gas, defence, and marine renewable industries. The global ocean is vast, covering three-quarters of the Earth’s surface but new technologies are gathering data at the microscopic level with the aid of robot vehicles and novel sensors.”

For over two decades NOC technologists have led the way with autonomous unmanned vehicles (AUVs) like Autosub series of vehicles. The latest AUV under development is NOC’s Autosub Long-Range, which will have an endurance of six months underwater, travelling distances up to 6,000 km (over 3,700 miles) – the ability to cross an ocean, reaching depths of 6,000 metres (nearly four miles).

Also on show in London will be the latest generation of miniature sensors. Advances in nanotechnology in the bio-medical sector have been innovatively applied to marine sensors. Lab-on-a-chip technology has drastically reduced the size of a package of sensors from the size of a dustbin down to the size of a coke tin, which means they can be placed on small platforms such as underwater gliders.

The National Oceanography Centre is also working with other leading technologists in the marine sector. With years of practical experience, extensive data collected at sea, and specialist testing equipment on site in Southampton, through the new Innovation Centre NOC is able to collaborate with companies to develop innovative products.

Working with two marine engineering companies: MOST Ltd and ASV Ltd, NOC has helped each of them to produce a robot surface vehicle. Although each company took a completely different design approach, both vehicles have an endurance of three months at sea, can harness energy from the environment – solar, wind and wave power – and the ability to deliver data back from in situ via satellite. A model of MOST’s robot boat, Autonaut, will be on display at Innovate 2015. www.autonautusv.com.

Also on display will be a prototype for innovative battery for marine autonomous vehicles capable of withstanding extreme pressure at depths of 6000 metres. A consortium of SMEs is developing the lithium sulphur battery with funding from Innovate UK. In addition to its enhanced performance, it will also be safer to use.

The official opening of the National Oceanography Centre’s Marine Robotics Innovation Centre takes place in Southampton on Monday, 23rd November. Throughout the day there will be seminars given by academics, engineers and business leaders. Over 250 invited guests are expected to attend.

Kevin Forshaw continued: “Companies taking space at the Marine Robotics Innovation Centre have access to our technical facilities such as deep pressure testing chambers and our ballasting tanks. But we have also seen the effect working with the NOC can have on small marine technology businesses, especially attracting grants and funding. Importantly, the centre provides an international hub for marine technology community which is set to grow.”