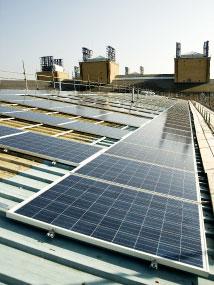 The photovoltaic array is just one of the many ways we are working to reduce our carbon footprint.

The start of the UK’s first national Climate Week on Monday 21 March is marked in Southampton with the unveiling of one of the largest solar power installations in the area.

The National Oceanography Centre (NOC) has installed a 117 kW Photo Voltaic (PV) array at its Southampton site as part of an ongoing drive to reduce its carbon footprint and save money on increasingly expensive energy bills in the coming years.

The system, which generates enough energy to meet the electrical demand of over 22 typical UK households, will help the Centre meet its challenging energy reduction targets.

The projected carbon savings from the system is equivalent to 50 tonnes of carbon dioxide a year. The array is thought to be the largest in Southampton and joins a growing number of PV installations in Hampshire.

The installation of over 500 solar panels on the roof of the centre’s dockside workshops has been funded by NOC’s owners, the Natural Environment Research Council (NERC). It is one of the latest in a host of energy conservation initiatives at the NOC which, in July 2008, received the ISO14001 environmental certification for its comprehensive environmental management system. NERC across its estate of UK research centres has also been awarded the Carbon Trust Standard.

The system, which uses solar radiation to generate around 91,100 kWh of electricity per annum, was supplied and installed by Reading-based Photon Energy, a specialist in renewable technologies. Installing photovoltaic systems had been made much more attractive due to the introduction of the ‘Feed-in Tariff’ which pays organisations for the power they generate and/or export back to the grid.

The solar PV system has been installed as the Coalition Government undertakes a fast-track review of the Feed-in Tariff, which plans to substantially reduce the rates for solar PV on installations over 50kWp from August 2011. The proposed new tariff means that an installation of this size would receive 40 per cent less than the current rate. Fortunately, since the NOC has installed the system before the new tariff is confirmed, it will still receive the existing tariff rate.

Michael Holmes, Director of Photon Energy, explained “The National Oceanography Centre array is one of the largest we have installed to date. Since April 2010, the government Feed-in Tariff has been a major driver for new installations. It means our clients are paid for every kWh they produce - and they gain additional savings from the energy they no longer require from their electricity supplier. As the NOC has completed the installation prior to the Coalition Government’s review of the tariffs, they will continue to benefit from the higher tariff set last April.”

Other carbon reduction projects at the centre include the installation of a pioneering Sea Water Cooling system in 2010, a comprehensive energy monitoring system, solar thermal and voltage optimisation.

National Oceanography Centre Executive Director, Professor Ed Hill said “The photovoltaic array is just one of the many ways we are working to reduce our carbon footprint. As an environmental science institution we endeavour to show leadership in this area and operate in a more sustainable way.

More information on the photovoltaic system and other environmental initiatives at the National Oceanography Centre is available from environ@noc.ac.uk.