Most UK coastal flooding caused by moderate, not extreme storms 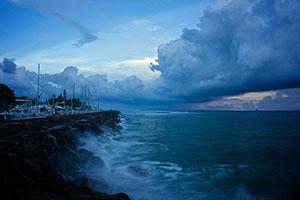 Scientists at the NOC and the University of Southampton have found that the majority of instances of coastal flooding around the United Kingdom in the last 100 years have been due to moderate storm events combined with high spring tides, rather than extreme storms.

Researchers have undertaken one of the most detailed assessments of extreme sea level and coastal flooding ever carried out for the UK. Their findings are published in Nature Research journal Scientific Data.

The team examined exceptionally high sea levels using tide gauge records dating from 1915 to 2014. In particular, they set out to assess the footprint of flooding along the UK coast. This helped them to determine what types of storms led to simultaneous flooding along extended stretches of coastline during the same storm, and to examine the temporal ‘clustering’ of the flooding events, i.e., events occurring one after another in close succession.

In addition, the study considered how unusual the 2013 - 14 winter season was from a coastal flooding perspective – a period when the UK experienced a remarkable sequence of extreme storms and coastal floods.

Dr Jenny Brown, from the NOC, concludes: “We found that storms during winter 2013 - 14 generated the maximum-recorded sea level at 20 of the 40 tide gauge sites around England, Wales and Scotland; and the largest number of extreme sea level events in any season in the last 100 years.”

Lead author, Associate Professor Ivan Haigh of Ocean and Earth Science at the University of Southampton says: “We found that most of the extreme storms and storm surges have, by chance, not occurred on high spring tides and hence haven’t led to flooding. The majority of instances of coastal flooding have been due to more moderate storm events. It is important that we improve our understanding and prediction of moderate storms, examine how these might change in the future with climate change, and not only focus our attention on extreme events.”

The researchers also identified four main storm track pathways approaching the UK (mainly from the westerly and northerly directions) and four broad corresponding footprints of extreme sea level events (four sections, which together, make up most of Britain’s mainland coastline).

Before now, knowledge of this area has been limited, but this study will help better inform flood management, the insurance sector, and national emergency and infrastructure resilience planning to minimise the impact of successive storm events. For example, knowledge of typical lengths of time between storm events will help determine how much time emergency response teams have to repair a flood defence before the following storm arrives.

The research was conducted in collaboration with the Flood Management Group at the independent civil engineering and environmental hydraulics organisation HR Wallingford in Oxfordshire, UK. NOC scientist Dr Jenny Brown received funding for this research from the Engineering and Physical Science Research Council Flood Memory Project.