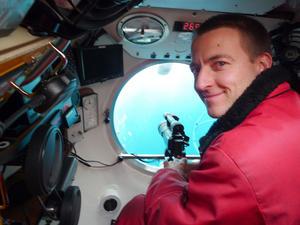 NOC scientists are carrying out research examining methane outputs from the seabed in the area of the Svalbard archipelago, off Norway

MASOX (Monitoring Arctic Seafloor – Ocean Exchange) is a long-term seabed observatory on the Arctic seafloor that has been monitoring methane flares off the west coast of Svalbard for the last two years.

The observatory was recovered during the recent RV Maria S Merian cruise, led by Germany’s Geomar. Dr Veit Huehnerbach from the DST-Marine Geosciences Group at NOC dived with the German manned submersible, JAGO, to hook up the lander to the vessel’s recovery wire.

The instruments on the observatory, which were provided by partners in Germany, Norway and the UK, recorded a whole suite of data on currents, water and seabed temperatures, seismicity and fluid flow on the gas flare site.

During the transit back to Germany at the end of the four-week cruise, Veit turned round the observatory and redeployed it in the Sleipner gas field in the North Sea for the EU-funded ECO2 Project, led by Ian Wright from NOC.

Gas Outlets off Spitsbergen are no new phenomenon

Marine scientists from Kiel in Germany, together with colleagues at the National Oceanography Centre, and scientists from Bremen in Germany, Switzerland and Norway, spent four-and-a-half weeks examining methane emanation from the sea bed off the coast of Spitsbergen with the German research vessel Maria S Merian. There they gained a very differentiated picture: several of the gas outlets have been active for hundreds of years.

With frequent storms and sub-zero temperatures nature drove the marine researchers – who were assessing gas outlets on the sea bed off the coast of Spitsbergen over four-and-a-half weeks – to their limits. Nevertheless, the participants were very pleased when they returned “We were able to gather many samples and data in the affected area. With the submersible JAGO we even managed to form an impression of the sea bed and the gas vents,” said the chief scientist, Professor Dr Christian Berndt from the GEOMAR Helmholtz Centre for Ocean Research, Kiel.

The reason for the expedition was the supposition that ice-like methane hydrates stored in the sea bed were dissolving due to rising water temperatures. Professor Berndt explained “Methane hydrate is only stable at very low temperatures and under very high pressure. The gas outlets off Spitsbergen lie approximately at a depth which marks the border between stability and dissolution. Therefore we presumed that a measurable rise in water temperature in the Arctic could dissolve the hydrates from the top downwards. Methane could then be released into the water or even into the atmosphere, where it would act as a much stronger greenhouse gas than CO2.”

In fact, what the researchers found in the area offers a much more differentiated picture. Above all the fear that the gas emanation is a consequence of the current rising sea temperature does not seem to apply. At least some of the gas outlets have been active for longer. Carbonate deposits, which form when microorganisms convert the escaping methane, were found on the vents. “At numerous emergences we found deposits that might already be hundreds of years old. This estimation is indeed only based on the size of the samples and empirical values as to how fast such deposits grow. On any account, the methane sources must be older,” said Professor Berndt. The exact age of the carbonates will be determined from samples in GEOMAR’s laboratories.

“Details will only be known in a few months when the data has been analysed; however the observed gas emanations are probably not caused by human influence,” says Berndt. “There are two other possible explanations instead: either they are symptoms of a long term temperature rise or they show a seasonal process where gas hydrates continuously melt and reform.” Another interesting observation made on the expedition, was that a very active microbial community that consumes the methane has established itself on the sea bed. “We were able to detect high concentrations of hydrogen sulphide, which is an indication of methane consuming microbes in the sea bed, and, with the help of JAGO, discovered typical biocoenoses that we recognised from other, older methane outlets,” explained microbiologist Professor Dr Tina Treude from GEOMAR, who also took part in the expedition. “Methane consuming microbes grow only slowly in the sea bed, thus their high activity indicates that the methane has not just recently begun effervescing.”

Colleagues from Bremen, Switzerland, Great Britain and Norway worked alongside marine scientists from GEOMAR and from the Cluster of Excellence, ‘The Future Ocean’. “The study of the gas outlets in the Norwegian Sea is a good example for combined European research” stressed Professor Berndt. Hence German scientists recovered an ocean floor observatory, installed by the British Royal Research Ship James Clark Ross a year ago during a joint expedition of the National Oceanography Centre and the Institut français de recherche pour l’exploitation de la mer (Ifremer). “Understanding the ocean as a system is a challenge that only works in international co-operations,” emphasized Berndt. The analysis of the gathered data will also be carried out internationally.

(Reproduced with kind permission of the GEOMAR Helmholtz Centre for Ocean Research, Kiel.)