To the Moho and beyond! 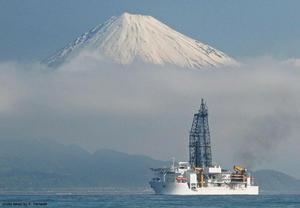 This spring, researchers including Professor Damon Teagle of the University of Southampton's School of Ocean and Earth Science, based at the National Oceanography Centre, Southampton, will mark the 50-year anniversary of an ambitious project to drill to the mantle, by taking another significant step towards the same dream.

In a Comment in Nature, Professor Teagle and Dr Benoît Ildefonse,of Montpellier University in France, the co-chief scientists of the upcoming Integrated Ocean Drilling Program Expedition 335, say that drilling into Earth’s mantle is now possible, and should hopefully begin within a decade. Next month, IODP Exp 335 scientists aboard JOIDES Resolution will drill into the intact lower oceanic crust for the first time to sample coarse-grained rocks called gabbros. These rocks make of the bulk of the oceanic crust and power black smoker hydrothermal systems.

Scientists’ eventual aim is to drill completely through the Earth’s crust under the ocean floor, across the Mohorovičić Discontinuity or Moho, and recover for the first time pristine samples from the mantle. The mantle makes up the bulk of our planet, stretching from the bottom of the crust — at 30–60 kilometres under the continents but just 6 kilometres under the oceans — down to the core 2,890 kilometres below. In their paper published in Nature, the scientists write that retrieving a sample direct from the mantle would provide “a treasure trove comparable to the Apollo lunar rocks”, and insight into the origins and evolution of our planet.

This goal has proven as difficult as going to the Moon: so far no one has drilled deeper than about two kilometres into the oceanic crust — a third of the way through. However, technology similar to that on the giant Japanese drilling vessel Chikyu (pictured) could in the foreseeable future be used to drill right through the crust.

The idea to drill into the mantle was born at a drinking club of notable Earth scientists in 1957. ‘Project Mohole’ sailed in 1961. It took the first scientific core from the seafloor, and developed techniques for ocean drilling that are still used by the oil industry today. But it failed at its mission. Over the next few years, scientists will undertake seismic surveys to assess three Pacific Ocean sites, looking for the best place to reawaken this dream.