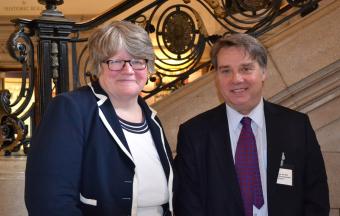 Thérèse Coffey MP, Parliamentary Under Secretary of State at the Department for Environment, Food and Rural Affairs presented at the annual meeting of the NOC Association this week.

While there, the Minister issued a Call for Evidence on safeguarding biodiversity in the UK Overseas Territories highlighting the vital role the ocean plays in the water cycle and climate systems as well as its importance to biodiversity and ecosystem services.

The meeting continued with presentations and panel discussions with the 60 attending members, focused on how the UK science community might contribute to the UN Decade of Ocean Science for Sustainable Development. The meeting was timely, coming just ahead of the First Global Planning Meeting for the Decade held in Copenhagen next week, at which NOC Executive Director, Ed Hill, is attending and speaking as a member of the opening plenary session titled: Setting a vision for the Decade.

The meeting also saw presentations from: Dr Mark James, University of St Andrews on the work of the Marine Alliance for Science and Technology (MASTS); an overview of the RAPID programme by NOC’s Dr Eleanor Frajka-Williams; and a report from the Marine Facilities Advisory Board on the UK Marine Research Infrastructure and Strategy, by NOC’s Associate Director, National Marine Facilities, Leigh Storey.