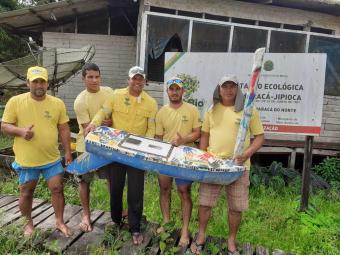 A mini boat built by students from King Edward VI School in Southampton has been recovered off the coast of Brazil after 46 days at sea, as part of a project coordinated by the National Oceanography Centre (NOC) and Educational Passages.

The Educational Passages project saw students work together over three months after school to build the boat, equipping it with a sail and satellite tracker that allowed them and the public to follow the boat’s ocean journey, and placed messages inside the watertight cargo hold for the finders. Named ‘KES Kraken’ by the students, the mini-boat landed on the shores of Brazil by 6 April 2022 at 03:42 GMT after travelling over 4,000km, and was successfully recovered with the local coordination and support of Prof. Dr Gabriel Araujo da Silva from Universidade do Estado do Amapá.

The five-foot un-crewed mini boat was deployed by NOC scientists from the world-class research ship, RRS Discovery in the Atlantic Ocean during their expedition to service a collection of moorings that are helping to measure ocean currents and examine the effects on short-term weather and long-term climate. The mini boat also had a suite of scientific sensors on board, so students were able to track in real time what the air and water temperature was during the journey, and compare it to NOC research.

“It has been great to learn more about the research that NOC and iFADO researchers are doing by being involved in this particular project,” said Cassie Stymiest, Executive Director of Educational Passages, “and now we all get to learn more about the research happening at the Maracá-Jipioca Ecological Station in Brazil, and share the data that the boat collected during the voyage. What a truly unique and wonderful learning opportunity this is.”

The KES Kraken mini boat is part of a fleet of five boats that are being launched from each European Atlantic countries under the umbrella of the iFADO project funded by the INTERREG Atlantic Area programme. The iFADO project aims to combine traditional monitoring with cost-effective, state-of the-art technologies such as remote sensing, numerical modelling and emerging observation platforms to support the Marine Strategy Framework Directive (MSFD) implementation in the EU Atlantic waters.

The KES Kraken’s journey is available on the Educational Passages website.

A special thank you to Brigade Onça-Pintada of the Maracá-Jipioca Ecological Station/ICMBio for helping in the recovery of the KES Kraken.

Video: KES KRAKEN miniboat is recovered with the support of Prof. Gabriel Araujo and the team of Estação Ecológica de Maracá-Jipioca (Amapá, Brazil).

Video: The team shared a video of a special visitor they spotted during the rescue mission