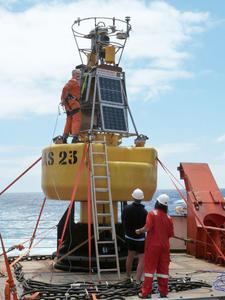 Everything is still going very well onboard the Meteor cruise 108 to the PAP observatory, however the workload is heavy for the team as there are not many people on board. The main observatory PAP1 has been deployed thanks also to a fabulous team work by NOC sensors and moorings group lead by Paul Provost. Fresh data is being transmitted to the PAP website thanks to the brilliant work of Jon Campbell on board Meteor and Maureen Pagnani on land at the British Oceanographic Data Centre (BODC).

The sediment trap mooring has been recovered with perfect samples for promising analysis. The Bathysnap camera has also been successfully recovered and re-deployed this morning. Additionally, drifting sediment traps from the University of Bremen have also been deployed and recovered once and are now ready for a second deployment. The Snow camera system has been deployed very successfully several times (and for the first time) with large numbers of images of particles which will be analysed and interpreted in collaboration with Morten Iversen of Bremen University. In association with this an Underwater Vision Profiler (UVP) was very generously loaned to us by Rainer Kiko at IFM-GEOMAR, Kiel. Although there have been occasional technical difficulties, there have also been some great successes and this will lead to a unique data set which will form the basis for future collaborative work.

All conductivity, temperature and depth (CTD) profiles went well and we deployed a perfect megacorer and box core with one more to go. We still need to deploy deep sediment traps and recover the old observatory mooring, which broke last December.

The weather has been perfect so far, but rather cloudy therefore no satellite data is available at this time. As we have some spare time ahead of us, we are considering coming into Southampton earlier than planned.

It has been a slow start with delay leaving Las Palmas and a stiff head wind on the way north. We did a CTD and acoustic release test on passage which was successful and this evening just before midnight we will start in earnest with a couple of megacorer drops. Tomorrow we will measure CTD with the newly borrowed UVP5 followed by a camera frame drop (with PELAGRA-Cam and Holocam) before Snatcher deployment and drifting sediment traps so we will have a diverse and intensive look at those snowy particles. All the optics seem to be working on deck and will all give a different perspective, which will be extremely useful to get fresh data.

The team on board is far too small in number, which is a challenge, but we should still get some good insights. Morten Iversen from the University of Bremen is onboard with a post-doc researcher and a masters student working on various studies on aggregates in the lab.

Preparation of the Parflux sediment traps is currently under way and the sensors for the ODAS mooring all seem to be working fine. The next level of proof will be deck tests of all the sensors together and assembled in the frame. This will be on Sunday 13th. Expected deployment is at 0900h on Monday but some data will start flowing on the web by Sunday and Maureen Pagnani, at the BODC, might already have some insights into progress. Paul Provost and his team have been outstandingly good and I have heard complimentary comments about them from the German technicians too, which is excellent both for his team and for NOC in general.

On Sunday we set off from Las Palmas to the PAP sustained observatory about 300m southwest of Ireland. Since 1989, this environmental study site in the Northeast Atlantic has become a major focus for international and interdisciplinary scientific research and monitoring including water column biogeochemistry, physics and seafloor biology. The first autonomous equipment included the sub-surface sediment trap mooring and the Bathysnap seafloor time-lapse camera system (both since 1989). Since 2002, a full depth multidisciplinary mooring has been in place with sensors taking a diverse set of biogeochemical and physical measurements of the upper 1000m of the water column. In 2010, a collaboration between the Natural Environment Research Council (NERC) and the UK Met Office led to the first atmospheric measurements at the site and this has continued since then to great effect.

The main mooring of the observatory broke last December during the horrendous winter storms which destroyed a number of Met Office moorings around the UK. However we were fortunate that the break occurred just below the main sensor frame and as a result we were able to recover it along with the massive Ocean Data Acquisition System (ODAS) buoy after it had drifted towards Ireland. We were therefore able to recover all of the sensors and, most importantly, the data stored in them. They are now all refurbished and ready for deployment at PAP along with a few additional sensors. It will, in fact, be one of our most sophisticated deployments to date with additional sensors and samplers and new ways of managing and transmitting data to the surface and from there by satellite to NOC. In addition we plan to recover a set of sediment traps which have been collecting sinking material in the lower part of the water column for the past 12 months and we will then deploy a new set. The Bathysnap time-lapse camera system which has been taking photos of the seabed at 4800m will be recovered as well to give an assessment of the behaviour of the benthic animals and how the seabed appearance changes in response to deposition of material. A new one will then be deployed ready for recovery next year.

These are the autonomous systems we will work on, but as is usually the case with our trips to PAP, we will also make observations on the temporal variability of the water column and seabed fauna - a task which is difficult or impossible to do autonomously. Furthermore we will on this occasion carry out some entirely novel research into the distribution and characteristics of marine snow particles in the top few hundred meters of the water column. These are inanimate particles which are the principle vehicles by which material sinks out of the upper sunlit zone and to the abyss, taking carbon down with them and out of contact with the atmosphere for centuries. Not only will we characterise the particles in situ using three different optical systems but we will collect them using the Marine Snow catcher and will then carry out a variety of experiments on them with colleagues from Bremen.

The RV Meteor is a German research vessel of nearly 100m length and although built in 1986 is fully fitted with state of the art facilities, scientific, technical and recreational.

The Porcupine Abyssal Plain Observatory is a sustained, multidisciplinary observatory in the North Atlantic coordinated by the National Oceanography Centre, Southampton. For over 20 years the observatory has provided key time-series datasets for analysing the effect of climate change on the open ocean and deep-sea ecosystems.

PAP is one of the 23 fixed-point open ocean observatories included in the Europe-funded project FixO3, coordinated by Richard Lampitt and Luisa Cristini at NOC: www.fixo3.eu.

The four-year project started in September 2013 with the aim to integrate the open ocean observatories operated by European organisations and is a collaboration of 29 partners from ten different countries.