In memoriam of Stuart Rusby 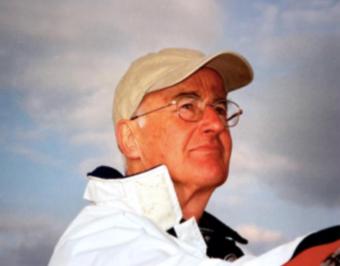 The National Oceanography Centre is deeply saddened to learn of the death of Dr Stuart Rusby (20 October 1931 – 7 July 2022).

To celebrate his significant contributions to the global marine community his daughter, with friends and colleagues at the NOC, have compiled a Synopsis of Stuart’s life in science.

Stuart Rusby was born in Weymouth on 20 October 1931. He was the son of Victor Rusby, a Naval Officer, and Irene, daughter of a famous country doctor from Peebles. His brother Cameron was 5½ years older.

During his early years, Stuart and his mother did their best to follow his father via postings to Gibraltar, Malta and Alexandria, Egypt. In 1939, just before the war, they moved to The Hague for a few months while his father learned Dutch and was thought to have been involved in espionage.

At the start of the war, Stuart attended school in Folkestone, Kent and he and his school were evacuated to Wales several times following the German invasion of the Netherlands and France. These evacuations and childhood separations were to have a lasting effect on his life.

Unlike his brother Cameron, Stuart was not able to join Dartmouth Naval College directly at age 13 due to his short-sightedness. Instead, he was sent to Pangbourne Nautical College, where he excelled in sailing and navigation. In 1949, after his A levels, he was eventually accepted into Dartmouth. Unfortunately, he then contracted tuberculosis and was sent to a sanatorium in Deeside to recover. His lung was deflated, and the discovery of streptomycin saved his life.

Having been discharged from the Navy due to his TB, Stuart then moved to London to study maths and physics at Regent Street Polytechnic. He graduated in 1954 and then joined the Admiralty Research Laboratory in Teddington, working on submarine detection. He was able to complete his Master’s and PhD whilst doing so.

After marrying Vigdis in Tromsø in 1963 and moving to Grayshott, Stuart was able to move his job to the National Institute of Oceanography, Wormley in 1964. Here he went on to develop, alongside Roger Edge and Mike Somers, a uniquely powerful long-range sidescan sonar, GLORIA (Geological Long-Range Inclined Asdic), which was able to ‘illuminate’ vast tracts of the seafloor using powerful transducers which Stuart had designed. GLORIA was towed at speeds of up to 6 knots behind a ship and ‘mapped’ the seafloor out to a range of 20 miles and depths of up to 6000m. The first launch of this enormous yellow 6-tonne towed array in Southampton resulted in the davit on RRS Discovery collapsing and GLORIA sinking into the dock.

In the ’70s GLORIA really took off and was used by geological and geophysical teams led by Tony Laughton, Arthur Stride and Roger Searle to map large parts of the North and South Atlantic, the Eastern Mediterranean and the Indian Ocean. One of the most exciting times for Stuart was when he was on watch one night sailing from Azores to Cape St Vincent, when he saw a very straight line on the sonar display. Recognising it might be some sort of fault it turned out this was the plate boundary between the Eurasian and African plates, which Tony Laughton subsequently named the GLORIA Fault.

It became clear around 1976 that with improved correlation signal processing, the transducer array for GLORIA could be reduced in size. So, Stuart, Roger Edge and Mike Somers began designing a new array and vehicle which was the same length, but only one third the diameter, which would prove much easier to handle in rough seas. It could ‘look’ both ways, so that the swath imaged was out to 20 to 25 miles at 10 knots, surveying 200 square miles per hour. A new, simpler towing system was designed, as well as a portable launching gantry, meaning it could be launched from the stern of any suitable vessel.

This GLORIA Mark II was a huge improvement and used widely over the following years. As well as the mapping conducted by IOS scientists, the USGS, at the behest of Ronald Reagan, commissioned its own edition to survey the entire coastal zone of the USA. This included the EEZs around Hawaii, Guam, Alaska and the Aleutian Islands. The sonar was towed behind an old fishing vessel, the M/V Farnella, from Hull. A ‘Road Atlas’ was compiled of the entire US seaboard out to 200 nautical miles. The success of GLORIA led to Stuart and Mike earning the Queen’s Award for Industry.

Towards the end of the ’70s, Stuart was involved in designing a new kind of data buoy, DB1, for use in acquiring weather and oceanic data offshore and transmitting to shore in Cornwall. It was a joint project with EMI and Hawker Siddeley, whereby IOS (Institute of Oceanographic Sciences, formerly NIO) designed the sensors and basic data buoy design. Trinity House laid the composite nylon and steel cables, designed to withstand waves of up to 50m, 200 miles off the SW approaches on the edge of the continental shelf, being the worst area foreseen by the offshore petroleum industry to forecast conditions.

DB1 transmitted to Polperro, Cornwall, via HF radio successfully for about two years. Stuart and Chris Hunter ‘enjoyed’ having to motor out 200 nautical miles offshore in huge swells in a motor launch to climb aboard the heaving buoy and descend below to change all the extremely heavy batteries. The buoy was later moved and moored off the west coast of the Shetland Islands to do the same job. A smaller version of this buoy was then developed commercially by EMI and Hawker Siddeley. Nowadays the use of oceanic data buoys is standard practice for both weather and sea-state forecasting.

In 1982 Stuart took over the Ocean Engineering group at IOS (the precursor of today’s Ocean Technology and Engineering group at NOC) and was promoted to Senior Principal Scientific Officer. The group grew to over 40 staff and was involved in a wide variety of projects, including traps for sampling fish at 6000m and towed and remotely operated sampling devices. A new sidescan sonar, TOBI (Towed Ocean Bottom Instrument) was designed by Stuart, Roger Edge, Mike Somers and Richard Babb, for more detailed imaging of the seafloor. This was towed much closer to the seafloor and resulted in higher resolution images with a shorter range.

Stuart had taken up flying aged 45 (in 1986) and flew many times across to Europe and up and down the coast of Norway. However, one of his most memorable trips was flying with Nic Flemming on a tour of Europe. They were investigating the need for new deep-sea submersibles and remotely operated vehicles (ROVs) and decided that rather than taking commercial flights all over Europe, they could fly in a light aircraft that Stuart had access to. At one stage they had to cross from Italy over the Alps to Innsbruck. They hadn’t fully considered the height of the Alps prior to the trip and were in a single-engine aircraft in an unpressurised cabin with no additional oxygen. Luckily, they lived to tell the tale, although Nic was instructed not to tell Vigdis how high they’d flown. Stuart then went on to paint a picture of the aircraft flying over the Alps, which rather gave the game away!

Their report was pioneering in that it predicted many developments that later became part of marine science’s technology ‘toolkit’ including one that later saw the light of day as Autosub6000. It appeared as an NIO Internal report in 1983 but was not published by the report’s European sponsors until 1991!

By 1988, Stuart had decided to take the early retirement being offered by IOS. He was just 57. However, this wasn’t the end of his scientific contribution to the community, as he then embarked on a part-time psychology degree at the Birkbeck College of London University aged 60. He thoroughly enjoyed the camaraderie of this course and went on to do research for a Master’s. However, the project, on the long-term effects of being evacuated in World War II, grew and grew. He managed to contact around 1000 people in Kent who’d been evacuated, mainly to Wales and the Southwest, and had a surprisingly high response rate to his questionnaire. His research developed into a PhD, which he obtained in 2005, and resulted in several published papers.

Stuart then became interested in the environmental risk factors leading to the onset of clinical depression. He was given access to the ‘register of twins’ at St Thomas’ Hospital, conducted yet more research on the genetic aspects of depression in monozygotic and dizygotic twins reared together and wrote a number of papers on the subject with Fiona Tasker, his PhD supervisor which more or less took him to the end of his years.

As light relief from this onerous task he enjoyed getting involved in astronomy and took a number of outstanding pictures of nebulae and galaxies using a DSLR camera and tracking telescope. He also built radio-controlled model aircraft, including a 1:6 Spitfire, which now has a new home with the Norwegian Spitfire Foundation at Kjeller Airport, Oslo.

Stuart always talked fondly of his years of research at ARL, NIO and IOS and considered himself very lucky to have worked with so many outstanding scientists. He died on 7 July 2022 and is survived by Vigdis and his three daughters, Ruth, Susie and Solveig.