In Memoriam of Sir Crispin Tickell 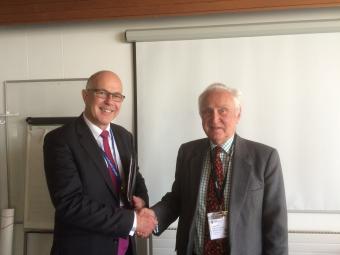 The National Oceanography Centre (NOC) is deeply saddened to learn of the death of Sir Crispin Tickell on 25th January 2022.

A well-known global-thinker, Sir Crispin was a British diplomat, environmentalist, and academic, known for his solutions-based approach to action on climate change. Sir Crispin was British ambassador to the UN, during which time he proposed the formation of a “World Environment Organisation” to address issues of global concern. Whilst not successful, this reflected his fundamental belief that the environment must be considered in a global manner.  He was also credited with persuading Margaret Thatcher to take climate change seriously, which led to one of the first major speeches on climate change by a top rank world political leader.

Sir Crispin authored the 1977 book “Climatic Change and World Affairs”, which argued that mandatory international pollution control would eventually be necessary, something that was, without doubt, ahead of its time. Despite his non-scientific background, he was the recipient of 23 honorary doctorates between 1990 and 2006, and was internationally respected as a driving force of science policy issues.

Sir Crispin visited the NOC Southampton in 2015 and gave an inspiring lecture titled ‘The Anthropocene, Big History and related themes’ remembered by many.