In Memoriam of Raymond Pollard 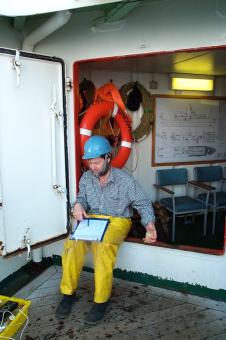 The National Oceanography Centre is deeply saddened to learn of the death of Raymond Pollard on 14 December 2021.

Raymond was a towering figure in oceanography who made major contributions to the subject, and who inspired and mentored many young scientists. To celebrate his career his colleagues at the NOC have compiled this Synopsis of Raymond’s life in science:

Raymond completed an honours degree in mathematics at the University of Cape Town before studying at Cambridge University for his doctorate. He followed his thesis, on the theory of near surface inertial oscillations, by a period with the Woods Hole Buoy Group making the first high quality observations of the structure of inertial oscillations and their propagation of wind energy into the upper ocean. Later he returned to the UK, first to the University of Southampton and then to the Institute of Oceanographic Sciences (IOS), Wormley in 1976.

Raymond exemplified the transition to big cooperative programmes and his early career saw leadership of the multi-national JASIN (Joint Air Sea Interaction) Programme involving multi-ship and aircraft studies off northwest Scotland. He went on to lead the UK contribution to WOCE (World Ocean Circulation Experiment) and numerous other major seagoing expeditions, not least around the Crozet Islands and in the Southern Ocean and Southwest Indian Ocean.

His interest in meso-scale process like ocean eddies stimulated a strong and lasting collaboration with biological oceanographers linking the physics of mesoscale upwelling processes to nutrient injection into surface waters and the associated space-time patchiness of oceanic plankton.

The ocean mesoscale (tens to hundreds of km, and days) meant new measurement techniques were needed to sample at the scale needed so Raymond was an innovator. He played a crucial role in the development and use of towed undulating CTDs (Seasoar particularly), was an early user of Acoustic Doppler Current Profilers (ADCPs) from which he pioneered extracting vertical velocities by inference from the horizontal fields, and he played a critical role in bringing scientific computing onboard ships – notably RRS Discovery – to process the vast quantities of data quickly and to adaptively adjust sampling to what was developing in the ocean.

The new, rapid, first analysis and interpretation of data at sea was very important for the science but it had effects beyond that. Many of us remember several ‘straight off the ship’ presentations given by Raymond where he would arrive off RRS Discovery on an aeroplane and present his first plots at a scientific conference bringing the immediacy, insight and excitement of new results to audiences in such an inspiring way.

Raymond played a critical role in forming and developing the big scientific teams we work in today at the NOC. He spearheaded the move to Southampton when in 1989 he led the formation of the James Rennell Centre for Ocean Circulation – set up to deliver WOCE, which integrated observations and ocean modelling. That group was the vanguard in the move of IOS to Southampton, relocating from Wormley to the Chilworth Science Park before moving into the then newly built Southampton Oceanography Centre in 1995.

After his spell as a senior manager, Raymond spent many years leading multi-disciplinary and multi-national research about into the way physical zonation in the ocean controls the broadscale distribution of biological phenomena. Questions raised by early programmes in the Southern and North Atlantic oceans led the Crozet Experiment (CROZEX); a major UK field programme that addressed the role of natural iron fertilization on carbon export in the Southern Ocean.

Raymond was a great scientist, fine colleague, mentor and inspiration to many and his loss will be felt by his former colleagues in the UK and around the world, and all those he worked with at sea including mariners, technicians and engineers. Raymond had huge energy and demand to extract every drop of information out of the data and days at sea, and sometimes he was hard to keep up with. As a colleague at the NOC has said, his way of working at sea is a legacy even today, “extreme attention to detail, maximising the time at sea, but at the same time being cheerful, kind, patient and understanding with people – all these were taught to us by Raymond”.

In his latter period at Wormley and at Southampton, Raymond worked closely with his wife Jane Read and their strong bond in science and companionship made a formidable team. Sadly, Jane also passed away in August 2021. They are survived by their son Harry.