In Memoriam of Philip Roy Pugh 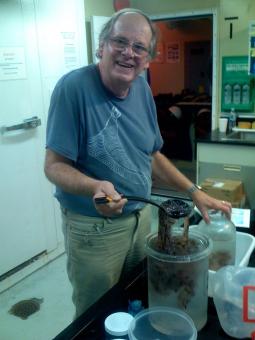 The National Oceanography Centre is deeply saddened to learn of the death of Emeritus Professor Philip Roy Pugh on 24 November 2021.

To celebrate his significant contributions to the global marine community, and his title as world authority on siphonophores, his colleagues at the NOC have compiled this downloadable Synopsis of Phil’s life in science.

Prof. Angus Best, Head of Ocean BioGeosciences at the NOC, said "Phil Pugh was a lifelong dedicated scientist and valued Emeritus Professor at the NOC, recently becoming a member of the Ocean BioGeosciences Research Group in 2020. His discovery and charting of the richness of biodiversity in the oceans will be a lasting legacy in our rapidly changing world, and is a fitting tribute to his life and work."

During his incredible career, and even after his retirement in 2004, most of Phil’s work was on a group of cnidarians, known as siphonophores. The Portuguese Man O’ War is the only famous example. Phil described a quarter of all known siphonophores (43 new species), more than anyone who has ever lived. His reviews and taxonomic syntheses were extremely important as they brought order to several confused siphonophore families, stimulating further discovery. The Antarctic siphonophore, Sphaeronectes pughi Grossmann, Lindsay & Fuentes, 2012, was named after him.

When Phil first started at the National Oceanography Centre in 1971 (then known as the National Institute of Oceanography, followed by the Institute of Oceanographic Sciences and then the Southampton Oceanography Centre) he worked on collections from the RMT net, which tended to break the fragile siphonophores into many pieces. Phil became aware of the true splendour of a complete siphonophore specimen when he joined US-based SCUBA diving and later deep-water submersible collecting expeditions. It was on one of these expeditions that Phil met his wife, Vicki. More recently, Phil’s research transformed again when he began to collaborate with researchers using molecular techniques, placing what was known about siphonophore diversity in this new phylogenetic context.

During his long career, Phil took part in over 50 research expeditions and published more than 100 papers and reports, becoming the world authority on his beloved siphonophores (a title he retains to this day). He was a much-loved character, who like all taxonomists continued his work long after retirement. He will be greatly missed by all those who knew him and worked closely with him. He leaves behind his loving wife Vicki, his daughter Emily, son-in law James, and granddaughter, Nina.

Dr Tammy Horton, Research Scientist and Manager of the Discovery Collections at the NOC said “Phil was not only a great friend, but an excellent taxonomist. His research legacy will live long in the siphonophore literature, and I will remember him fondly as I work to preserve the many samples and specimens he collected for the Discovery Collections, ensuring this immense and valuable collection remains available for scientists to study now and into the future.”

This is a video of Phil describing his encounters with siphonophores.

Video credit: CreatureCast - Footage From The Deep from Casey Dunn on Vimeo.