In memoriam of Peter Saunders 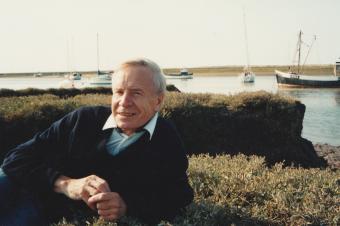 Peter will be fondly remembered by many here, his contributions to ocean physics were very significant, especially his meticulous contribution to high-precision measurements at sea.

The National Oceanography Centre is deeply saddened to learn of the death of Peter Saunders on 20 August 2020.

Peter was a Physical Oceanographer who began his career with interests in meteorology. He studied atmospheric convection for his PhD at Imperial College, London before moving to the Woods Hole Oceanographic Institution in the USA where he worked on the marine atmospheric boundary layer. In 1976 he and his family returned to the UK and worked at the Institute of Oceanographic Sciences and then at the Southampton Oceanography Centre (pre-cursor institutions of the NOC) where he participated in the Joint Air Sea Interaction Experiment which involved 14 ships and three aircraft, with more than 50 teams of investigators from nine countries.

Peter subsequently worked on the deep sea bottom boundary layer and went on to have important roles in the World Ocean Circulation Experiment (WOCE). As a meticulous observational oceanographer, he was a natural choice to lead the international group that defined the programme of surface-to-bottom observations of temperature, salinity and ocean chemistry – the WOCE Hydrographic Programme (WHP).

NOC Chief Executive, Prof. Ed Hill, commented “Peter will be fondly remembered by many here, his contributions to ocean physics were very significant, especially his meticulous contribution to high-precision measurements at sea.”

The NOC current head of Marine Physics, Prof Sheldon Bacon, described Peter as being “an important influence on the continuing science in the Marine Physics group at the NOC through the individuals he worked with and the projects they worked on.”

Peter collaborated with many at the NOC, past and present, to produce numerous scientific papers, over five decades.

A synopsis of Peter’s life in science by John Gould.