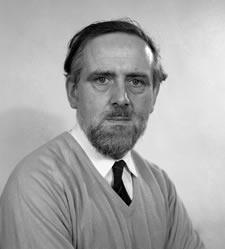 The National Oceanography Centre is saddened to learn of the death of Dr David Cartwright FRS.

David graduated in natural sciences from Cambridge University and in mathematics from London University. Researching marine physics at the National Institute of Oceanography (NIO) from (1954-73), he developed a particular interest in sea waves, tides, and variations in sea level.

During a year at Scripps Institute of Oceanography at La Jolla, California, he did pioneering work with Dr Walter Munk on tidal spectroscopy and prediction, as well as the analysis of surges in sea level caused by storms.

In 1973, he was appointed Assistant Director of the Institute of Oceanographic Sciences at the Bidston Observatory (which later became the Proudman Oceanographic Laboratory, now the National Oceanography Centre at Liverpool). There David continued with his team to study Atlantic tides using pressure variations on the ocean floor and satellite measurements of the ocean surface. He worked with colleagues to develop increasingly deeper, longer-deployed and specialised devices for the measurement of tides and non-tidal signals in bottom pressure, the latter for ocean circulation studies. This work carries on at NOC Liverpool today.

Moving to US NASA-Goddard Space Flight Center, Maryland, USA, in 1987, he continued his research on satellite altimetry using data collected by the US Navy’s Geosat spacecraft to map tides in the global ocean. He also helped to plan the launch of the successful Topex-Poseidon satellite in 1992.