Meet the man behind the LEGO Deep Sea Robot Model 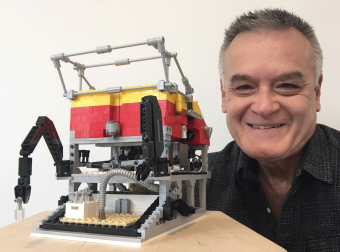 From the beginning this project was designed as a way to engage the public, especially young people, with all the incredible work being done at the NOC.

In August 2021 the National Oceanography Centre shared the amazing LEGO Deep Sea Robot Model based on the Isis ROV on social media.

Within 24 hours it smashed its first milestone of reaching 100 supporters on the LEGO Ideas website.

We sat down with the model’s creator, the NOC’s Rob Curry, to find out more about his time at the NOC and his motivation behind the project, the process of designing and building the model plus what it would mean to see his creation on the shelves.

How long have you been working at the NOC and what is your role here?

"I’ve been at the NOC for 14 years now, starting in 2008 on a two-year contract developing the website and Public Engagement initiatives for the “Scientific and Environmental ROV Partnership using Existing iNdustrial Technology" (SERPENT) project. After that I joined the NOC Communications team and used my public engagement skills to highlight the amazing research undertaken at the NOC, and run the NOC Open Days. I’m now working as a web developer in the Database, Web and Information Service team in NOC IT."

Why did you choose the Isis ROV specifically as the subject of your model?

"In the SERPENT project I worked with industrial ROV images and footage of the creatures and environments in the deep sea on a daily basis, but I never had the opportunity to see any of the ROVs up close and personal. However, in my new public engagement role in Communications, I was in a position to find new ways to shine a light on the NOC’s very own Isis ROV. With my passion for building in Lego, it was inevitable that I began a project to recreate this iconic vehicle, as a way to connect and inspire young people with the important work taking place at the NOC."

Do you have any previous experience building LEGO sets?

"I was into Lego from my early years but when my son got interested in building models, we both came across the free Lego Digital Designer (LDD) program. With a ready-made kit of digital Lego elements, it was easy to create virtual custom Lego models of any size and complexity. That’s when I made my first version of the Isis ROV in LDD and along with the built-in Lego ‘Made by Me’ feature, it meant I could design and order my own self-designed real Lego set complete with a custom box."

What was the process of planning the model? Did it go through many iterations before the build began?

"Having started with the smaller model, I realised that to create as detailed a model of the ROV as possible I had to design a much larger version. The early versions were made in LDD, but then I discovered stud.io, a far more sophisticated free Lego building application. I soon realised I could add much of the functionality of the real vehicle, so the sliding storage tray and the extra swing-out side trays were added, along with the multi-function Predator manipulator arms."

How long did it take to build?

"In total it took about 5 months to design and a further 6 months to source all the parts and build it, over a 2-year period. Part-way through the process, the original ROV was involved in a catastrophic accident, which meant that it had to be rebuilt virtually from scratch, so it was a challenge to closely recreate this new version."

What would it mean to you to see your model on the shelves?

"From the beginning this project was designed as a way to engage the public, especially young people, with all the incredible work being done at the NOC. If it were to become a Lego product, it would be a satisfying culmination to all the years I spent working towards the goal of wider engagement, especially now that we are all working towards a revitalised new NOC."

How can people support the model?

"Just go to the Deep Sea Robot project Lego Ideas page and hit that Support button. You’ll need to register to make it count, but there’s no cost or commitment. Also, do tell all your friends and family about the project and ask them to support it so that it will have a chance to become a real product they can own!