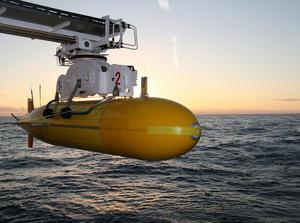 A formal project is now in place to create NOC’s new, national autonomous underwater vehicle facility. Gwyn Griffiths, Head of Ocean Technology and Engineering, is managing the project to deliver the facility, which has been christened MARS (Marine Autonomous and Robotic Systems).

MARS will be the UK’s main centre for research and innovation in developing these submersibles – which include gliders and the highly successful family of Autosub AUVs – for the UK marine science community.

The creation of MARS fits with NERC’s strategic framework which identifies the need to focus on the development of remote observation platforms, moving systematic measurement of the oceans away from ships and onto a network of autonomous machines, combined with satellite monitoring systems.

The facility will sit as a separate and visible group within the centre’s Sea Systems division.

Engagement work had been carried out with potential clients and collaborators of MARS, including the British Antarctic Survey (BAS), the University of East Anglia and the Scottish Association for Marine Science (SAMS).