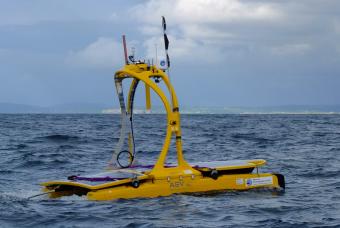 A fleet of pioneering marine robots, built and operated by the National Oceanography Centre (NOC) and its partners, has successfully detected whales and porpoises and recorded the sounds they make in a survey of the deep ocean off northern Scotland.

In the summer of 2017 a fleet of 11 autonomous marine robots was deployed to explore the seas northwest of the Orkney Islands in search of marine mammals and sources of man-made noise pollution. The mission was part of an annual series of marine robot trials co-ordinated by the NOC in partnership with 16 organisations representing UK government, research and industry.

The robots remained at sea for two weeks and were controlled remotely by pilots who communicated with the vehicles via satellite. The fleet comprised eight submarine gliders and three unmanned surface vehicles, travelling up to 200km offshore to the Faroe-Shetland Channel where water depths exceeded 1000m.

Prof Russell Wynn of the NOC, and co-ordinator of the mission, said: “This is the largest fleet of marine robots to be deployed in UK offshore waters. The mission gathered a huge amount of useful data, including the sounds of several marine mammals. These data can help us to identify important biodiversity hotspots, and assess the potential impacts of noise pollution on marine animals.”

Initial analysis of noise recordings collected by hydrophones mounted on the robots has revealed that at least four species of marine mammal were detected. These included the metallic clicks of deep-diving sperm whales and the eerie whistles made by pods of pilot whales. There were also recordings of fin whale, the second largest animal in the world, and small numbers of harbour porpoise. Sources of noise pollution including ship engines and seismic surveys were also detected.

Pierre Cauchy, a PhD student at University of East Anglia who is analysing some of the acoustic data, said: “This successful trial clearly demonstrates how marine robots can be used to listen for noise in the ocean. It was particularly exciting to record a sperm whale, and my analysis has revealed that it was probably about 12 m long and present in an area of the deep Faroe-Shetland Channel. I was also able to pick out a large pod of long-finned pilot whales that remained close to our submarine gilder for several hours.”

The robot fleet included a new type of unmanned surface vehicle developed by a UK company, ASV Global, in partnership with the NOC. The ‘C-Enduro’ was deployed from Orkney and travelled over 850 km on its two-week journey to the Faroe-Shetland Channel and back, its longest mission to date. In addition to listening for acoustic noise, the C-Enduro collected photos every minute from a camera mounted on the mast, and sent these back to the control room at the NOC via satellite.

The marine robot trials are being used to inform project partners about potential applications of these new technologies. Prof Wynn added: “These robots are cheaper, quieter and less polluting than manned vessels, and are therefore ideal for long-term marine environmental monitoring. This latest trial has shown how they can act as our eyes and ears in the ocean, sending back valuable real-time data on marine life and human activities.”

Listen to the recordings: