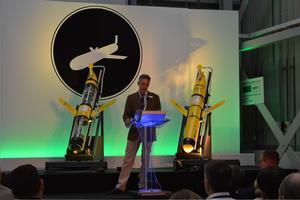 Southampton’s Marine Robotics Innovation Centre at the National Oceanography Centre is this week celebrating its one year anniversary, by hosting a week of marine technology events and welcoming a recent flurry of new partners and members.

Opened in November last year, by Jo Johnson, Minister of State for Universities and Science, the centre now has 19 members and eight companies located in the building working in partnership with the NOC’s engineers and scientists. The centre also has 11 Associate Members who regularly access the programme of networking events.

The centre has created six full time positions so far, and has pulled in £15m investment for autonomy and sensor development and £8m worth of collaborative research and development projects.

Kevin Forshaw, NOC’s Associate Director, Innovation and Enterprise commented, “It’s truly been a fantastic first year for the centre, which is buzzing with activity. By creating this working link between the science and the industries which use it we are able to advance marine technology far quicker than ever before.

Over the last year the centre has played host to a number of high profile meetings and visits including a G7 meeting, Innovate UK, UKTI Ambassadors, Royal navy, MPs and NASA.

This month the centre has welcomed as its newest partners, Thales a global technology leader for the Aerospace, Transport, Defence and Security markets, AutoNaut Ltd a global leader in autonomous wave propelled vessels and scientific instrumentation company, Nortek, which has relocated its UK office to the centre. They are joined by new Associate Members BMT Group, which is one of the world's leading maritime and engineering consultancies and Liquid Robotics the leader in long duration, autonomous surface vehicles.

This week’s Marine Autonomy and Technology Showcase, will see over 300 delegates from countries as far as Australia visit the NOC in Southampton for a programme of free workshops, talks, demonstrations and networking. The showcase is a unique opportunity for businesses find out about the latest developments in ocean technology, learn about available funding, and to share development ideas with influential users from the marine and maritime industries.