Marine research can solve some of Europe’s greatest challenges 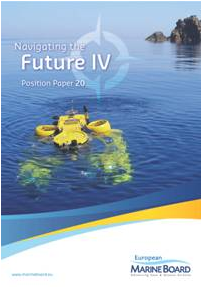 Navigating the Future IV provides a blueprint for the next phase of seas and oceans research in Europe.

The National Oceanography Centre has welcomed a new position paper from the European Marine Board highlighting how innovative marine research can solve some of Europe’s greatest policy challenges.

European policy makers have some big issues to grapple with: climate change, food and energy security, human health, and a loss of economic momentum resulting from the financial crisis. The seas and oceans, with their vast resources, can provide a sustainable supply of food; energy from wind, wave and tide; new drugs through marine biotechnology; valuable raw materials from the ocean floor; and much more. According to the EC Communication on Blue Growth1, the EU blue economy delivers a gross added value of €500 billion per year and supports 5.4 million jobs. There is a clear recognition that to make maritime activities sustainable, will require a significant investment in collaborative and cross‐disciplinary marine research.

In its new position paper, Navigating the Future IV, the European Marine Board scans the horizon to anticipate emerging societal challenges and corresponding future research priorities concerning the seas and oceans. The paper demonstrates the key role of marine science in addressing societal challenges and supporting blue growth. It outlines the tools and technologies that will be needed to realize these opportunities including the next generation of ocean observation infrastructure. It also examines the training and skills that will be required by tomorrow’s marine experts, and the importance of creating better interactions between marine scientists, policy makers and the general public.

NOC, through its world-leading research a technology development, is addressing many of these challenges facing the planet that are outlined in the paper. NOC’s Executive Director, Professor Ed Hill, was one of the instigators of the policy paper, and the centre’s Head of International and Strategic Partnerships, Jacky Wood and its former research director, Professor Phil Weaver, are co-authors.

Professor Hill said “We welcome this influential publication. It is particularly important as, for the first time, it sets out how marine science is helping to address the grand challenges facing society, including food, energy, climate change and natural hazards.”

“Navigating the Future IV provides a blueprint for the next phase of seas and oceans research in Europe,” explains Dr Niall McDonough, Executive Scientific Secretary of the European Marine Board and editor of the paper. “A huge number of scientists, science networks and stakeholders contributed to this paper so the final product represents the collective voice of a large marine community.”

At a special launch event in Brussels on Thursday 20 June, attended by representatives of 44 stakeholder organizations, Navigating the Future IV was presented to Máire Geoghegan‐Quinn, EU Commissioner for Research, Innovation and Science and Maria da Graça Carvalho, Member of the European Parliament and Rapporteur for the EU Horizon 2020 Programme2.

In an opening speech, Dr Kostas Nittis, Chair of the European Marine Board, stressed that “we have to support science excellence in Europe and communicate our passion for marine research”. Navigating the Future IV represents a flagship publication that demonstrates how marine science can support policy and tackle socio‐economic challenges.”

Speaking at the event, Máire Geoghegan‐Quinn, EU Commissioner for Research, Innovation and Science, explained: “The Marine Board plays a major role in promoting marine science and technology in Europe which is vital for achieving sustainable ocean science and management. The launch of Navigating the Future IV is particularly timely as we prepare for the first Horizon 2020 programme. Navigating the Future IV will be a valuable source of ideas and common priorities in the area of marine sciences, providing a vision for science and technology in Europe.”

Navigating the Future IV also calls for a quantum leap forward in the integration of European marine research to allow for the scale of investment and collaboration necessary to meet the major challenges in achieving effective ocean stewardship, while creating a platform for blue growth.

Responding to this, Maria da Graça Carvalho, highlighted the vital role that the marine sector plays in the blue economy which is “central to Europe’s prosperity and wellbeing". She also announced that “a separate, visible and new activity named Cross Cutting Marine and Maritime Research, has been introduced in the Horizon 2020 programme. This separate activity will maximise the synergies between research areas when conducting research in the marine and maritime environments.”

Navigating the Future IV makes a link between applied, market‐driven research which can deliver early economic gains, and more fundamental research, which is necessary to improve our understanding of the natural ocean system which provides us with so many benefits.

Kostas Nittis summed up this point “In Navigating the Future IV, we show that understanding marine ecosystems and how they are changing will be essential for achieving sustainability in growing maritime sectors. We must continue to support both applied and fundamental marine research and to reward scientific excellence; these are the ingredients for generating the transformative knowledge and technologies which can shape our future.”

The event on 20 June also launched EurOCEAN 2014, a major conference focusing on marine science grand challenges to be held in Rome on 7–9 October 2014. The announcement was made by Professor Enrico Brugnoli, European Marine Board delegate for the National Research Council in Italy (CNR) on behalf of the three Italian Marine Board member organizations, CNR, CoNISMa and OGS, co‐organizers of the conference. “EurOCEAN is one of the most important events in marine and maritime research for both scientists and policy makers” he said.

In looking forward to the EurOCEAN 2014 conference, Máire Geoghegan‐Quinn noted that “EurOCEAN is considered as a top science conference in Europe which delivers concrete messages to science and policy. These are instrumental in strengthening the knowledge base for Europe and developing common priorities in the area of marine sciences”.