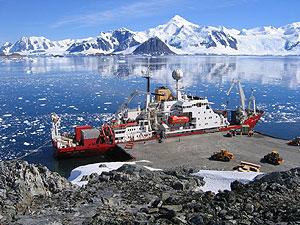 Scientists from the National Oceanography Centre are preparing to set sail to sub-polar regions on a very technical and scientific challenge – to measure the currents of the northern North Atlantic Ocean from the surface to the seafloor.

They hope to discover the key processes that control heat content and heat transport in the sub-polar gyre, and the local and global effects of those changes.

The international Overturning in the Sub-polar North Atlantic Programme (OSNAP) has been four years in the planning. In early June, the fieldwork programme will officially commence when the UK research icebreaker RRS James Clark Ross sails out of Newfoundland in Canada with 26 scientists and technicians on board. The ultimate goal of the project is to bring all their measurements together to calculate the total ocean circulation in the region.

Dr Sheldon Bacon from the UK’s National Oceanography Centre (NOC) is the principal investigator for UK-OSNAP and has overall responsibility for the project and linking with international partners. Dr Bacon said: “It has taken a huge amount of work, both nationally and internationally, to get OSNAP approved and funded.

“It is a major research expedition to high latitudes where, in some locations, icebergs and sea ice abound. It is an extraordinary and unique opportunity for science as well as everyone involved. We'll learn new facts about the functioning of the ocean and its impact on the global climate system.”

UK-OSNAP is about gaining new understanding of how the UK’s nearest ocean, the North Atlantic, moves heat from the subtropics to the Arctic, and why the heat stored in the ocean changes over time. The sub-polar region of the North Atlantic, between Canada, Greenland, Iceland and Europe, contains a re-circulating ocean gyre (the sub-polar gyre), and scientists want to know how the gyre circulation interplays with the south-to-north movement of heat. 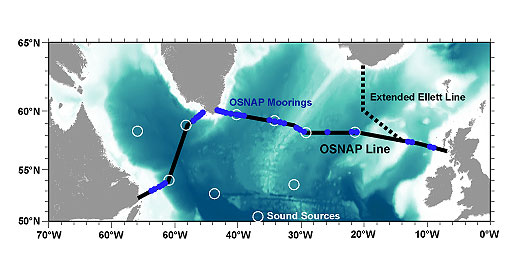 UK-OSNAP project manager, Dr Penny Holliday, who is also co-investigator and one of the project’s lead scientists said: “I am very excited about the start of the project; the first few months have been spent purchasing new equipment and planning the details of the field programme with colleagues here in NOC, and with our international partners.

Dr Holliday’s focus will be on using their measurements to describe the variability in the deep western boundary current east of Greenland. The water in this cold, deep current comes from the Arctic and Nordic Seas, and is part of the global circulation pattern that causes warm water from the tropics to flow to the high latitudes where it releases its heat to the air, cools, sinks, and returns south again. Scientists know this current exists but are not sure how changeable it is over time on scales of years to decades.

NOC’s Dr Brian King will lead the first element of the international measurement programme on OSNAP’s maiden cruise, working alongside scientists from across the UK to make biogeochemical measurements during the cruise. Those measurements are part of RAGNARoCC (Radiatively Active Gases from the North Atlantic Region and Climate Change), a related NOC project that seeks to understand how the same region of the North Atlantic absorbs, stores and carries carbon.

Meanwhile NOC’s Dr Chris Wilson and Neill MacKay will be using Argo floats and a mathematical technique called the inverse method, to develop a record of the circulation of the upper ocean at seasonal timescales, from 2000 to the present day.

Scientists have been studying the North Atlantic for many years and over that time they have learned much about the way it works. However measuring the currents from the surface to seafloor across the whole North Atlantic Ocean with an area of more than 40 million square kilometres is a great technical and scientific challenge.

The RAPID project, which has been continuously monitoring the subtropical North Atlantic for the past 10 years, has shown it is possible to measure the ocean circulation with a series of moored instruments positioned at strategic locations on the edges of the deep ocean basins – called the RAPID array. The northern North Atlantic has more and smaller ocean basins than the subtropical North Atlantic, so the OSNAP array is larger and involves more countries than the RAPID project.

Results from OSNAP will be used by centres that make seasonal to decadal forecasts of weather and climate; in the UK that is the Met Office Hadley Centre. The results will improve the models which will lead to more accurate forecasts as well as a better understanding of climate change. The forecasts are used by UK and international policy-makers who are responsible for managing living with environmental change, and by businesses making decisions about resources and markets. Ultimately businesses and individuals will benefit from these results.

The effort required to mount such an ambitious observing network means that OSNAP is a multi-national project with partners from the UK, US, Germany, Canada, France, the Netherlands and China. The international project is lead by the US, and NOC is the project leader for UK-OSNAP and has been from the first discussions within the international community. OSNAP is funded by the Natural Environment Research Council (NERC) and the National Science Foundation (NSF) for five years from autumn 2013.

The UK team will be using moorings to measure the deep currents off east Greenland, moorings and gliders to observe the currents west of the UK, and Argo floats to measure the upper ocean currents across the whole North Atlantic. The US partners are deploying moorings west and east of Greenland and over the Reykjanes Ridge and in the Iceland Basin, plus some floats to observe the deep circulation in the Labrador, Irminger and Iceland basins. The Canadians and Germans are deploying moorings in the west Labrador Sea, and the team from the Netherlands will observe currents in the eastern Irminger Sea. Partners from China will be making additional glider surveys west of the UK.

On each mooring the instruments will be positioned at intervals along wires held vertical by an anchor at the seafloor and glass balloons at mid-depths and near the surface. The instruments take measurements continually, so there will be a complete record of the variations in the ocean currents.

OSNAP’s maiden research voyage is expected to last seven weeks, with participants from NOC due back in late July.