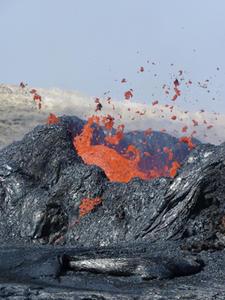 Recent research into the late stages of continental breakup, has shown that a final episode of plate stretching may be responsible for the eruption of large volumes of magma often seen at magmatic rifted margins.

This research was completed by Dr Derek Keir of the University of Southampton’s School of Ocean and Earth Science based at the National Oceanography Centre, Southampton, and Dr Ian Bastow (University of Bristol).

The study was conducted in Ethiopia, an ideal place to address this still poorly understood stage of continental breakup, because the rifting process can be observed first hand, just before seafloor spreading begins.

Continental breakup and the transition to seafloor spreading are characterised by extensional faulting, thinning of the lithosphere and, at magmatic margins, voluminous intrusive and extrusive magmatism.

It is difficult to discriminate between different mechanisms of extension and magmatism at ancient continental margins because the continent–ocean transition is buried beneath thick layers of volcanic and sedimentary rocks and the tectonic activity that characterised breakup has ceased.

Instead, the timing of these mechanisms is inferred from theoretical models or from the geological record preserved at the fully developed, ancient rifted margins.

In this recent research, Dr Keir and Dr Bastow synthesised constraints on the spatial and temporal evolution of magmatism and extension in Ethiopia. It was shown that although intrusion of magma maintains crustal thickness during the early stages of the continent–ocean transition, subsidence of the margin below sea level, and eruption of voluminous basalt flows, is initiated by late-stage thinning of the heavily intruded, weakened plate just before the onset of seafloor spreading.

The study concluded that faulting, stretching and magma intrusion are each important, but at different times during breakup.

Dr Keir says “The next stage of research is to use observations from tectonically active rifts such as in East Africa, to interpret the preserved geology at rifted continental margins around the world”.

Keir and Bastow’s research was presented in a paper entitled ‘The protracted development of the continent–ocean transition in Afar’, and published in Nature Geoscience.