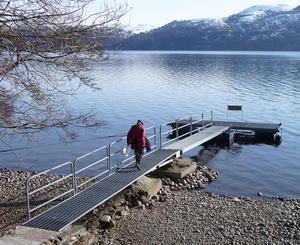 ... A tide like this has never been observed in a western European lake before.

Despite being 16 metres above sea level and with no tidal input from the ocean, Loch Ness still has its own tide, which has been measured – for the first time – by Liverpool-based scientists from the National Oceanography Centre.

Using pressure sensors to measure the tide at several points along the loch, Philip Woodworth and his colleagues, Machiel Bos and David Pugh found that there is a rise and fall of 1.5 mm along the 35-km lake.

“If you were on a boat in the middle of the loch, you certainly wouldn’t notice it,” said Philip Woodworth “but a tide like this has never been observed in a western European lake before.”

Tides are well known in large lakes around the world such as the Great Lakes in North America but this is the first time a tide has been measured in a western European lake, or loch.

Loch Ness tilts as the whole of Scotland bends with the passing of the tides around Britain. Combined with the tidal attraction of the moon and sun the Earth, even though Loch Ness is land-locked there is a change in the height of the water twice a day.

The team placed pressure sensors a few metres under the lake surface at six locations, from Fort Augustus in the far southwest to Aldourie in the far northeast. They then monitored the change in the height of the overlying water during the course of 201 days.

David Pugh, a visiting professor at NOC describes Loch Ness as the largest spirit level in the world. “The holy grail would be to learn from the effects of the tides something about the Earth’s crust. So the more precise we can get, the more we may learn about the crust.”

The study has been published in the Journal of Geophysical Research http://www.agu.org/pubs/crossref/2011/2011JC007411.shtml.