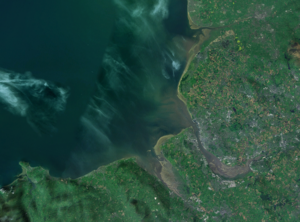 New research tracking the movement of dredged sediment around Liverpool Bay could save millions of pounds, according to scientists at the National Oceanography Centre in Liverpool.

Each year, sediment has to be dredged from the port and deposited elsewhere to maintain access for commercial vessels. But according to the new study, the dredged material appears back in the port again within just a few weeks of its removal, carried by sea currents.

“There are two competing sediments coming in; from the sea and from the river,” says Dr Alex Souza of the Natural Environment Research Council’s (NERC) National Oceanography Centre. “They meet in the estuary where they begin to fill up the channel.

“They need to be dredged so that ships can get through but it’s a very expensive thing to do. At the moment, they move millions of tonnes every year, but some of it is carried back there by sea currents within a month.”

The team used computer models to predict the movement of a particle of dredged material once it had been deposited in the bay.

“It’s just like the computer models they use to predict the weather,” says Dr Souza. “For the weather they track a balloon; here we are tracking a particle of sediment.”

Previous models hadn’t taken into account the differences in density between fresh water from the river and salty seawater. Those differences drive currents which, in turn, affect the movement of the dredged sediment.

The costs of dredging are not just economic. Concern has also been expressed about the disturbance of contaminated materials and the damage they could cause to the environment.

Dr Souza and his team are working with the Centre for Environment, Fisheries & Aquaculture Science (CEFAS) to look for areas within the Mersey Estuary where the material could be safely disposed.

“The money saved could be in the millions of pounds,” he says. “Obviously, repeatedly dredging the same material is costing a lot of money, but the savings in environmental costs could be even greater.”

The Port of Liverpool, managed by the Mersey Dock and Harbour Company, is one of the most important for commercial goods in the UK, handling nearly 700,000 containers annually. Plans are in place for a second terminal which, when completed, will almost double Liverpool’s shipping capacity and accommodate some of world’s largest container vessels. In order to house those larger ships, the new development will require substantial dredging work to deepen the channel.

The study is published in the Journal of Operational Oceanography and forms part of the iCOAST project, helping to forecast the changing shape of the UK coastline.