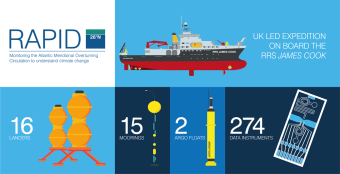 These observations provide a unique dataset used to validate the numerical models used for weather and climate predictions.

On March 9 the Royal Research Ship (RRS) James Cook departed from Tenerife on an expedition to measure of one of the world’s largest system of ocean currents, the Atlantic Meridional Overturning Circulation (AMOC).

These measurements are used to understand the natural variability of the ocean and climate system and its impact on the weather.

This forms part of the National Oceanography Centre (NOC) led RAPID-AMOC 26N project, which has been collecting data on the AMOC since 2004 in collaboration with the University of Miami and NOAA in the USA.

Currently an array of more than 200 instruments are in the water gathering data on the temperature, salinity and flow rate of the AMOC, which is responsible for the transfer of large volumes of heat from the tropics to northwest Europe, keeping its climate relatively mild. The energy involved in this heat transfer is equivalent to 35,000 times the average rate of electricity consumption in the UK or about one million times the output of an average UK nuclear power station.

Writing from the ship, Chief Scientist Ben Moat from the NOC, said: “With every recovery of data from the RAPID 26N array of instruments, we learn new things about how the large-scale ocean changes on timescales of days to decades. These observations provide a unique dataset used to validate the numerical models used for weather and climate predictions.”

This project has continued to evolve by using and supporting innovative technology. In this expedition, the on board team will be recovering water samplers and oxygen measurements to help scientists on the ABC-fluxes project better understand the role of the subtropical North Atlantic in the global carbon cycle.

Also new for this year will be the deployment of new bottom lander instruments from NOAA that release data pods to surface once a year, and transmit data back to scientists on land.

Based on recent cold winters in the northern North Atlantic, the outcomes of the RAPID-AMOC 26N project predict that the large-scale ocean circulation will have intensified.

NOC scientist and RAPID-AMOC 26N project lead, Dr Eleanor Frajka-Williams, added: “At the end of the expedition we’ll use the data we recover to make a preliminary estimate of the circulation strength over the past 18 months, so stay tuned!”

RAPID-AMOC 26N started in 2004 as a collaborative project between Natural Environment Research Council (NERC) in the UK, and the National Science Federation as well as the National Oceanic and Atmospheric Administration (NOAA) in the US. The project is set to continue acquiring data, as its NERC funding has been extended until 2020. The RAPID data are available online.