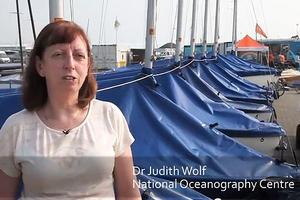 NOC researcher, Dr Judith Wolf, explains some of the science behind achieving world class performance at sailing in a new video released ahead of the Olympic sailing events at Weymouth.

Cutting Edge: Behind Sailing explored what it takes to win gold at Olympic level through an interactive, thought-provoking and demonstration-packed evening at the Weymouth and Portland National Sailing Academy.

Judith is an expert in coastal modelling of tides, currents and waves and the brains behind Team GB’s gold medal at the Seoul Olympics. She is also a keen sailor herself.

Weymouth was one of six places across the United Kingdom chosen by the Royal Institution and Research Councils UK to host a Cutting Edge series event.