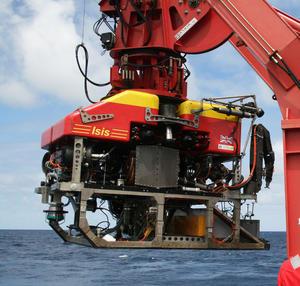 The rebuild of Isis is gathering pace as the remotely operated vehicle is repaired following a shipboard incident at the start of the year.

It was in January near the Antarctic Peninsula, during the James Cook cruise JC055, that Isis was struck by the ship’s port propeller during deployment and was severely damaged.

Since then, the ROV Team, part of National Marine Facilities Sea Systems, have been busy with the painstaking and complex task of rebuilding the vehicle and installing the electronics and hydraulics that operate the range of tools – such as the manipulators, high definition camera and suction sampler (also known as the ‘slurp gun’) – that have made Isis such a valuable asset to UK marine science. Much of the repair is being achieved through stripping off the salvaged frame and use of NMFSS’s existing holding of spares.

The syntactic foam floats, that ensure positive buoyancy (payload), will retain their now iconic red and yellow livery. One unexpected benefit of the rebuild is that the team have had a chance to improve the design of the frame. By adjusting the way the mass of Isis is distributed through the main frame and onto the tool sled the overall structural strength of Isis has been improved.

A thorough testing process will follow to ensure that all the hydraulic and electrical connections work. The three main pressure housings for the electronics will be pressure tested at facilities in Scotland or France to ensure they can withstand the rigours of operating at depths of four miles (10,000 pounds per square inch).

The current cruise running on the James Cook in the SW Indian Ocean, originally planned for Isis, is being carried out with a substitute ROV, the German counterpart, IFM-GEOMAR’s Kiel6000, which is part of a new collaboration and bartering arrangement. This cruise is also being supported by other camera platforms, notably the SHRIMP video sled, to assist in fulfilling some of the Isis functions. NMFSS Deep Platforms team members are supporting this cruise to assist in the operation of the Kiel6000 and Shrimp systems.

The plan is to complete the rebuild so that Isis will be available to explore some of the planet’s least accessible – yet, scientifically, most important – locations from Autumn 2012.