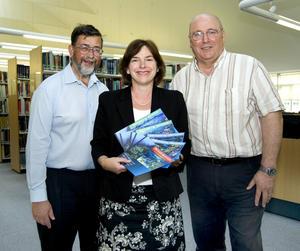 The issuing of these stamps by UNPA is a fitting tribute to IOC.

IOC, the UN body responsible for promoting cooperation between international research institutes and governments in the studying the world’s oceans, started its fiftieth anniversary celebrations on 8 June 2010 (World Oceans Day).

Twenty four commemorative stamps were issued on 6 May by the United Nations Postal Administration (UNPA) on the theme ‘One Planet, One Ocean’. They were designed by marine-life artist Wyland, founder and president of the Wyland Foundation, a non-profit organisation dedicated to promoting, protecting and preserving the world’s oceans and marine life.

Six envelope-sized sheets of first day covers of the stamps were presented to NOL by NOC’s Trevor Guymer and Rolly Rogers, who attended the annual meeting of IOC’s governing body at UNESCO in Paris in June as members of the British Delegation.

“The issuing of these stamps by UNPA is a fitting tribute to IOC and will help raise awareness of the importance of looking after the world’s oceans and managing their resources in a responsible and sustainable way,” said Guymer.

Jane Stephenson, NOL’s Head of Information Services, said: “I am delighted to accept these stamps on behalf of the library. They will be a valuable addition to our collections, and we hope whenever possible to put them on display for visitors.”

The first day covers were stamped at UN Offices in New York, Geneva and Vienna.