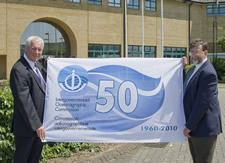 In 2008, the UN General Assembly decided that, as from 2009, 8 June would be designated as ‘World Oceans Day’ to raise global awareness of the challenges faced by the international community in connection with the oceans.Studying the oceans in their entirety demands a cooperative international approach not just between research institutes but also between governments. The main body within the UN family for promoting such cooperation is the IOC, which is now in its fiftieth year.

The anniversary celebrations coincide with the annual meeting of the IOC’s governing body at UNESCO in Paris. Head of the UK delegation, Southampton-based Trevor Guymer of the NOC, said “The oceans are of fundamental importance – they are a major component of the Earth’s climate system and provide 97% of the space occupied by life on Earth, and are its greatest genetic resource.”

As part of its contribution, the UK has provided anniversary flags to fly on the masts of Member State’s research ships that have 50th anniversary-branded cruises and also on institute flagpoles, including at the NOC (Southampton).

There is unprecedented interest by public and governments alike and stewardship of the marine environment is high on the agenda. Through its activities, the IOC has played a major role in increasing our knowledge of the oceans and in raising their profile.

“Much more remains to be done, and further internationally coordinated science is urgently needed if we are to have sensible governance based on the best evidence available. This presents a major challenge for the IOC in its next phase,” said Guymer.

In its 50 years, the IOC has initiated and coordinated not only marine research but also other essential activities in marine science, e.g., services, observation systems, hazard mitigation and capacity development. Separately, or in partnership with others, it has been responsible for many well known marine-related international activities.

The World Ocean Circulation Experiment and CLIVAR (Climate Variability and Predictability), are past and present examples of projects conducted by the World Climate Research Programme. The Global Ocean Observing System consisting of a permanent global system for observations, modelling and analysis of marine and ocean variables will support operational ocean services worldwide. Maps of the seafloor produced by the General Bathymetric Chart of the Oceans programme are the most authoritative in general use.

The IOC also has a long-established programme to help systematic cataloguing and exchange of data collected from national and international marine programmes through a network of data centres. Marine management issues, such as coral reefs, harmful algal blooms and integrated coastal area management, are also a key focus of the Commission.

In the area of natural hazards, the devastating Indian Ocean tsunami of December 2004 has led to a major initiative in establishing tsunami warning and mitigation systems, linking where appropriate into a wider multi-hazard approach. The NOC has been involved in virtually all of these activities for much of the IOC’s history, as were its predecessors, and hosts the UK IOC Office.