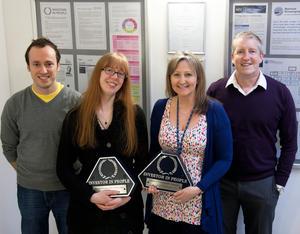 Established for over 20 years, Investors in People is a business improvement tool designed to help organisations enhance their performance by supporting and developing their most important asset – their members of staff.

This is the fourth time that NOC Liverpool has met the IiP standard. Achieving the award is a significant accolade and retaining it is by no means a formality. Staff members are interviewed by an assessor – who spent three days at the Joseph Proudman Building in Liverpool last week – looking at a range of factors, including staff development programmes and employees’ awareness of their role in the success of the NOC. Organisations need to demonstrate continued commitment to employee development to gain recognition as an Investor in People.

Head of Human Resources at Liverpool, Pam Ferguson, explained: “Initial feedback from the assessor indicates that NOC met the standard with ‘resounding strength’ and that we are well on the way to meeting many indicators in the ‘beyond the standard’ category.”

The achievement of the standard for BODC, whose members are based at both Liverpool and Southampton, made it a notable double, as it was also a fourth success for the BODC team. BODC Director, Dr Juan Brown, paid particular tribute to Mark Hebden and Liz Bradshaw of BODC and was very grateful for the support of Pam and Peter Hunt of HR, for their efforts in retaining the IiP standard.

NOC Executive Director, Professor Ed Hill, congratulated teams. He said “This is a tremendous recognition of our people and systems at NOC Liverpool and BODC. Everyone involved, especially the HR team, deserve congratulations for this achievement, which recognises the way we value and involve our people. All those who worked on the preparations for the IiP assessment should be proud of this accolade, which requires an immense and sustained effort to retain.”

Tags:
Liverpool
About Us