International scientific challenges to be addressed in Winchester 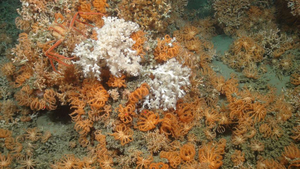 One hundred and sixty scientists will descend on Winchester this week as part of a globally significant meeting to address the challenges in submarine habitat mapping.

The meeting, called GeoHab, is being held in Winchester Guildhall between the 2nd of May and 6th of May and has attracted scientists from 24 countries, including Australia, Brazil, Philippines, Korea and Russia. The National Oceanography Centre (NOC), head-quartered in Southampton, is leading the hosting of this event and is among the largest centres for marine habitat mapping in the world.

Last year the NOC created a series of maps ranging in scale from a 200km canyon, down to an individual cold-water coral polyp. These ‘nested-maps’ were used to identify potential locations of deep, cold-water corals that were then investigated by lowering a deep-diving robotic vehicle based at the NOC, over the side of the research ship. Once underwater, the robot was able to take high definition three-dimensional video of the canyon walls. This allowed the team to verify the presence of cold-water corals at these locations. Several ‘dives’ were carried out at various sites within the canyon to build an overall picture of the extent of coral. This information informed protection measures within the Whittard canyon marine conservation zone, off the South-west coast of Ireland.

Dr Tim Le Bas, from the NOC who is helping to organise this meeting, said “We chose Winchester because it is a site of national historic interest, and has excellent facilities for an international conference.

“I am really looking forward to the opportunities this meeting will provide to make these maps more understandable and usable by standardising the data used to build them. This will allow the maps to be used more widely, and so will be an important step in understanding our marine environments and how we might value and protect these areas. The marine environment is one of the last areas on earth to be exploited for resources and we must do this responsibly using information that can be gained from these new maps.”

The NOC has led the development of a system that allows scientists to make better use of mapping data using the backscatter imagery from sonar echoes. This area of science forms part of the NOC’s on-going, world-leading research into marine geology and ecosystems.