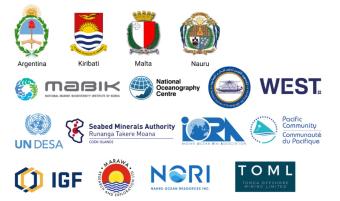 The National Oceanography Centre (NOC) is pleased to become a partner in the Women in Deep-Sea Research (WIDSR) project, a joint initiative by the International Seabed Authority (ISA) and the UN Office of the High Representative for the Least Developed Countries, Landlocked Developing Countries and Small Island Developing States (UN-OHRLLS).

The NOC will provide a member of the Advisory Committee as well as use our NOC-West P&I bursary to provide opportunities for women professionals from developing States to participate in marine scientific research expeditions.

The WIDSR initiative stems from the UN Ocean Conference in 2017, where the ISA committed to improve gender equality in marine scientific research by enhancing the role of women and their access to leadership positions through capacity development (#OceanAction15467). This – along with the efforts of the ISA Secretary-General, Michael Lodge as a champion of the International Gender Champions Network, a network of global leaders committed to advancing gender equality – exemplifies the endeavour of ISA towards the implementation of targeted measures aimed at improving the integration and empowerment of women scientists from developing States in deep-sea research programmes, including through a series of capacity-development initiatives.

Alan Evans, NOC Head of Marine Policy, said “This is yet another opportunity for the NOC to re-affirm our commitment to support the ISA with their mandate to promote marine scientific research, for all. Enabling individuals from countries less able to participate in high seas research such that those countries develop a greater understanding of deep sea environments and capabilities in the management of those areas. The WIDSR also aligns with the NOC’s own ongoing commitment to Equality, Diversity and Inclusion including women in science and women in engineering to affect cultural and systemic change towards gender equality.”