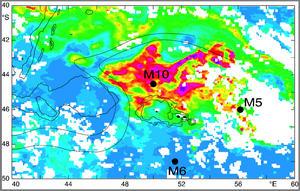 Good scientific studies will be essential if reliable information is to be provided to organisations considering climate remediation strategies.

Scientists at the UK’s National Oceanography Centre (NOC) will participate in an international effort to assess the efficacy of ocean iron fertilisation (OIF) in reducing the amount of carbon dioxide in the Earth’s atmosphere, as well as its potential impacts on marine ecosystems.

Members of the In situ Iron Studies (ISIS) consortium have signed a Memorandum of Understanding that recommends the support of OIF experiments in the open ocean and the independence of each participant. ISIS scientists will follow internationally agreed practices regulating OIF research being developed under the London Convention/London Protocol.

Through the process of photosynthesis, tiny marine plants called phytoplankton living in the sunlit surface ocean use the energy of sunlight to convert carbon dioxide drawn down from the atmosphere into organic compounds needed for growth. When they die, a small fraction of the organic carbon sinks to the ocean depths where it can remain locked away for decades or even centuries.

It is known that that artificial iron fertilization can stimulate phytoplankton growth in the open ocean. However, previous studies have been limited in scope, in terms of both spatial area, duration and the measurements made.

“Much remains to be learnt about the efficiency of iron fertilisation in promoting long-term sequestration of carbon dioxide by the oceans, as well as its impact on marine ecosystems,” said Professor Richard Lampitt of the NOC.

Professor Ken Buesseler, Senior Scientist at Woods Hole Oceanographic Institution (WHOI) agrees, “Previous OIF research has been insufficient to understand the promise or potential repercussions of its use for carbon sequestration. Given our present circumstances, it seems prudent to answer these questions more definitively.”

The ISIS group has identified a variety of observational, experimental and modelling approaches to this topic. Deliberate fertilisation experiments may form a part of this and if so tests will be carried out at scales of several hundred kilometres across, deploying numerous and diverse instruments, and lasting months or years.

Opponents of proposed geo-engineering schemes cite the risk of unintended environmental impacts and argue that in addition, such schemes could distract from efforts to reduce anthropogenic carbon emissions.

Richard Lampitt said “We’re certainly not ready to geo-engineer the ocean. The experiments themselves do not pose a significant hazard to the environment and are needed to assess the efficiency of iron fertilisation in reducing atmospheric carbon dioxide. In addition, the potential to generate harmful side effects will be a major focus of all such research. Good scientific studies will be essential if reliable information is to be provided to organisations considering climate remediation strategies.”