Insights into the Arctic source of freshwater in the North Atlantic 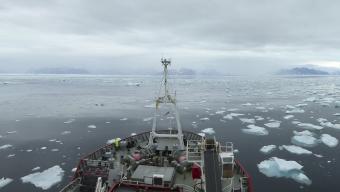 New research provides the first clear observational evidence of how salinity is linked between the Arctic and the North Atlantic.

NOC scientist and lead author, Dr Cristian Florindo-Lopez, said “Ocean salinity plays an important role in regional climate by influencing the ocean currents that drive heat around the planet. Therefore, by enhancing understanding of the source and variability of North Atlantic salinity, this finding may help improve forecasts of the climate in Europe.”

Published in the Journal of Climate, this research was led by the National Oceanography Centre (NOC), and includes collaborators from the Bolin Centre for Climate Change in Sweden and the Department for Fisheries and Oceans in Canada.

Dr Florindo-Lopez continues “before now, records of the volume of Arctic freshwater reaching the North Atlantic only went back a few years. So we had to use ocean models when we needed to estimate how this variation changed over decades. This research changes that for the first time”.

The authors analysed many years of ocean measurements taken right in the path of Arctic freshwater currents on the Labrador shelf, east Canada. The aim was to understand how much freshwater travelled west of Greenland and into the North Atlantic.

“What I find most interesting is that the dataset we used began many years ago with a set of completely different purposes. Firstly to monitor icebergs in the region after the Titanic sank, then to assess fish stocks in Canadian waters. 70 years later we have repurposed those invaluable data sets to understand how much freshwater has been flowing to the North Atlantic every year since then” added Dr Florindo-Lopez.

The results of this study link the decadal changes of Arctic freshwater currents with the salinity of the Arctic and North Atlantic oceans. In periods when more water was leaving the Arctic, the authors observe a coherent increase in Arctic salinity, and a corresponding salinity decrease in the North Atlantic. This is important because it shows how changes in the climate system can be coordinated over vast regions of the Earth.

Professor Penny Holliday, from the NOC, who was part of the study said "This analysis provides the first clear observational evidence of the pathway by which Arctic and North Atlantic salinity is linked".

During his investigation of the Arctic freshwater currents, Dr Florindo-Lopez also showed new evidence of the route taken by rainwater falling into the enormous Canadian river systems that flow into the Hudson Bay. He showed that the river runoff makes its way into the narrow Labrador Coastal current after it leaves the Bay, and that long-term changes in rates of runoff can be seen many hundreds of miles away downstream on the Labrador Shelf.

The research was funded by the University of Southampton, Obra Social La Caixa, NOC, NERC (through the OSNAP and TEA-COSI projects) and the Swedish National Space Board. Fundamental data was provided by the Fisheries and Oceans Canada Atlantic Zone Monitoring Program, and by Stephen Déry and Hydro Québec.