The influence of chaotic ocean eddies 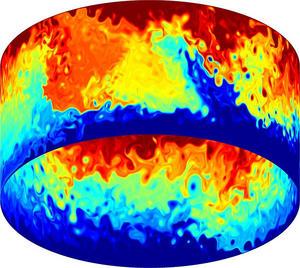 Research at the National Oceanography Centre (NOC) has highlighted the significance of eddies and chaos within the ocean in controlling the response to forcing from climate change. Therefore, it is important that scientists are careful when accounting for these while interpreting ocean observations or computer model forecasts of climate.

The work, published in the Journal of Geophysical Research, by Dr Chris Wilson of NOC, and collaborators, examines how the Southern ocean responds to the observed strengthening of the overlying eastward wind stress during the last 30 years.

Certain physical processes in the ocean generate strongly nonlinear or chaotic variability. Mesoscale ocean eddies are the ocean’s equivalent to atmospheric weather systems and are generated through a similar fluid flow instability process. Just as the weather may be hard to forecast accurately at certain times or places, or far into the future, so may ocean eddies and therefore ocean climate.

A typical patch of the ocean surface contains many more mesoscale eddies than the overlying atmosphere does, simply because ocean eddies are ten to one hundred times smaller. This presents challenges, both for the observation and modelling of the ocean. As climate models become more sophisticated, ocean eddies are simulated more realistically and there is more room for chaos.

Dr Wilson and collaborators have used a similar technique to that used in weather forecasting, called ‘ensemble modelling’, to separate the response of the ocean to changes in the wind from the chaotic background variability.

Using this method it was discovered that the eastwards volume transport of the Southern Ocean did not significantly respond to the wind changes, whereas the ocean eddies gained kinetic energy in proportion to the increase in wind stress. The kinetic energy lag time was found to be almost as likely to be 5 years as it was to be instantaneous, or any time in between. Previous studies, based on fewer observations and model simulations, characterised the lag time to be 2-3 years.

Dr Wilson said, “We looked at 44 very similar simulations of the Southern Ocean which encircles Antarctica, each containing ocean eddies. The simulations either differed in their initial conditions or in their wind forcing from the atmosphere. Central to our approach has been the use of an intermediate complexity ocean model called Q-GCM, which allows faster computation but also allows us to explore the ocean chaos which is increasingly relevant.”

We hope that future research will focus on using sustained Southern Ocean observations and modelling studies to further explore the suggestion that there is a 10–15 year forced oscillation, which was highlighted during this study. Such a finding would enable useful climate predictions over several decades.

Image: A snapshot of one of the 44 idealised simulations of the Southern Ocean using Q-GCM showing the potential vorticity at the ocean surface. The presence of chaotic ocean eddies require techniques used in weather forecasting in order to understand the true characteristics of climate change.